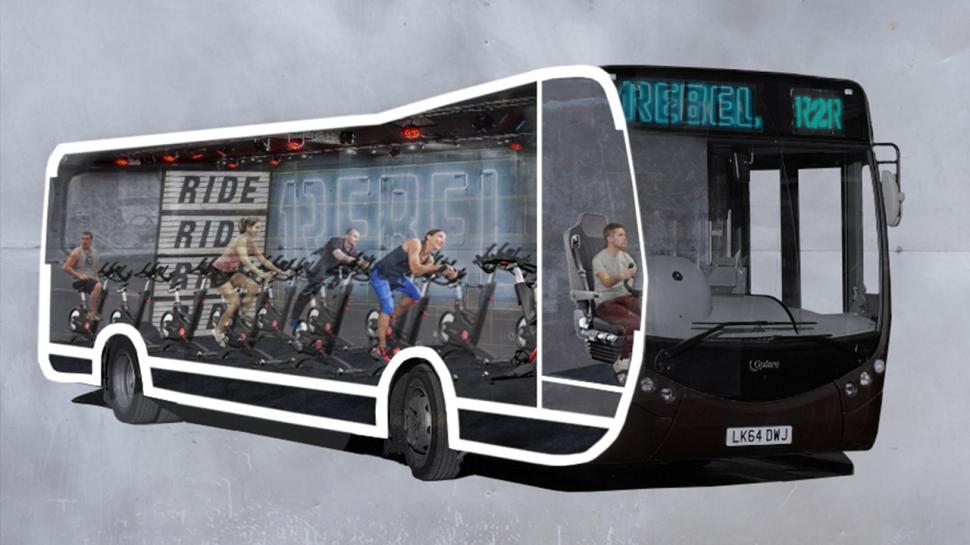 Commute by bike... while on a bus

Moving those travelling without moving
by Alex Bowden

Are you a Londoner who sort of likes the idea of cycling to work but for some reason doesn’t want to and would instead much prefer to be cooped up inside a bus with a load of sweating commuters? If you are, a London gym has just the thing for you – a commuter bus equipped with stationary exercise bikes.

BikeBiz reports on the Ride 2 Rebel bus – a concept devised by James Balfour and Giles Dean, the founders of the 1Rebel gym which would also serve as the destination for the bus should it attract enough interest to get off the ground (figuratively speaking – there are, at present, no plans to install wings).

"It is an absolute no brainer for us that we can create more efficiency in people’s routines by transforming their commute.

"For those who want the components of a class, but perhaps don’t have the time to commit during the day, this provides a great solution for them to maximise time they would otherwise be spending just travelling to work."

Some of you may be aware of another way in which a pedalling person can be conveyed from Point A to Point B, but BikeBiz quotes Eric Brodie, who has pioneered a similar idea in Boston known as Bus Bike. Brodie points out that urban cycling can be intimidating to many people.

“Some ask: Why not just grab a bike and ride to and from work? For many, that's a perfect way to commute. But for others, it's not. The unfortunate reality is that urban bicyclists have to compete with hazards associated with cars, pedestrians, beat up roads, and changing weather conditions. For some, the distance is too far, while others don't want to have to bike in both directions."

He also points out that a group cycling class differs from cycling on the road. “It's social, musical, and an excellent way to burn a lot of calories.”

Bus Bike will also cost $35 per journey if it becomes a commuter service. Ride 2 Rebel doesn’t yet mention cost on its website, although it does claim to have over 2,000 people in line for tickets.