Andre Greipel wins a stage of the Giro d'Italia and shares ride on Strava...
by David Arthur @davearthur

With Marcel Kittel not contending yesterday's Giro d'Italia stage 5 sprint finish, the door was wide open for the rest of the fast men to claim victory, but in the end, another German sprinter, Andre Greipel, took the win.

Lotto-Soudal's Andre Greipel hit over 50kph (30mph) in the final metres of the sprint to clinch the victory. It was a powerful and dominating performance. He has uploaded his ride to Strava which provides a bit of an insight into what is required not only to win a sprint stage but also to get over the climbs that featured on this 233km stage. And also the 41kph average speed for that distance! 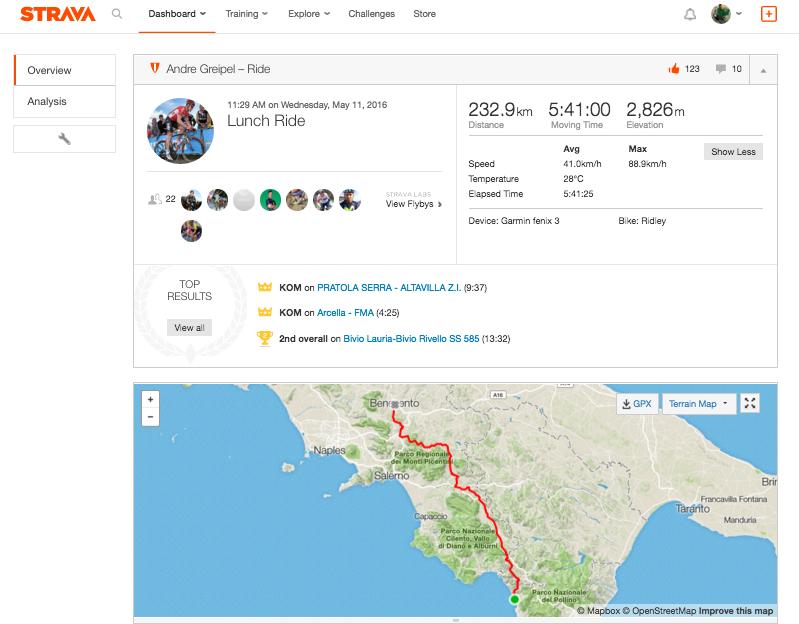 Greipel bagged a few top ten places on a handful of climbs that featured on the 233km stage, showing the level of effort he must have put in to stay near the front of the race. He might have won the race in the final few metres with a powerful sprint finish, but there was plenty of hard work prior to that to ensure he could be in with the final group contending the sprint.

Quite a few professional racers are active on Strava, but in our opinion, we'd like to see more racers sharing data from races on sites like Strava or some of the alternative training websites, as it offers a level of transparency we've not enjoyed before.

Greipel's ride doesn't include any heart rate or power data, which is a shame as the intensity and effort level required isn't revealed. According to the uploaded activity, which is called only 'Lunch Ride' (a default upload name used by Strava, he might want to rename it), Greipel used a Garmin Fenix 3 GPS watch to record the stage, and photos show that he was wearing a heart rate chest strap.

- 6 reasons to use Strava