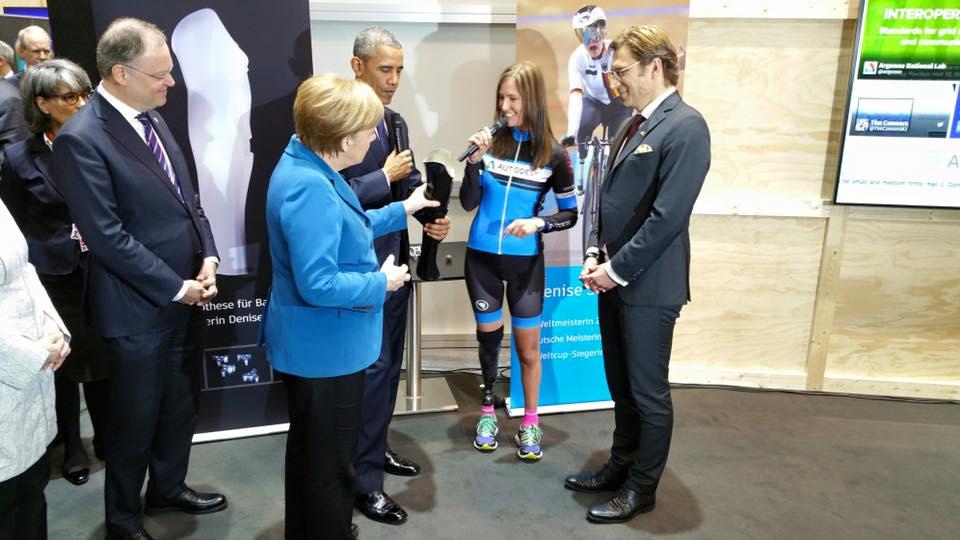 Paralympic medallist gets prosthetic limb 3D printed ahead of Rio

Denise Schindler, who won silver at London 2012, has shown it to Merkel and Obama
by Simon_MacMichael

A German para-cyclist aims to be riding at September’s Paralympic Games in Rio with a prosthetic limb created through 3D printing – and has already shown it at a recent trade fair to Chancellor Angela Merkel and US President Barack Obama.

Denise Schindler, who took silver in the C1-C£ road race in London four years ago, has worked with American 3D printing software company Autodesk to create the prosthesis, reports The Star Online.

The cyclist, who lost part of her right leg at two years of age due to an accident, told Reuters: "We are currently testing the 3D-printed prosthesis and whether its quality reaches that of the traditional handmade prosthesis.”

She added that "It feels different" to the type of prosthetic limb she has used in the past. 3D printing is said to make it faster to manufacture a prosthesis, as well as reducing cost, and also does not require a cast to be made.

The picture above shows her with the US president and German chancellor at last month's Hannover Messe trade fair.

Both in track and road para-cycling and in sports such as track and field athletics, the choice of prosthetis can make a huge difference to an athlete’s performance, and a poor fit can lead to pain while competing.

Some – such as the one Great Britain’s Jody Cundy unveiled ahead of the London 2012 Paralympic Games – use cutting edge design and materials, and are also built with aerodynamics in mind.

They can cost a lot of money, however, which is a problem for athletes who may not benefit from national funding programmes. Ireland’s Colin Lynch turned to crowdfunding platform Indiegogo last year to raise £8,000 towards the prosthetic limb he will be using in Rio.