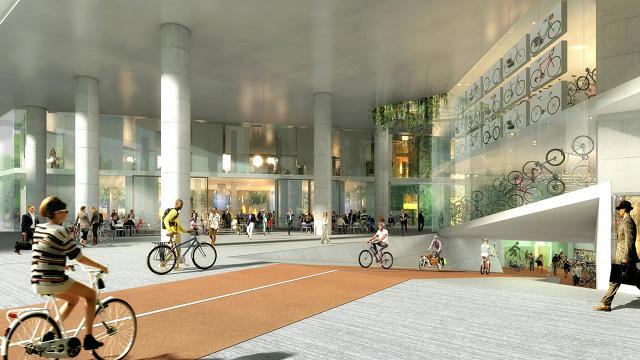 A planned office building in Oslo will showcase cycle parking in its foyer – and will not have parking space for motor vehicles other than ones that are powered by electricity.

According to Fast Company, the Oslo Solar building in the Norwegian capital will have 500 cycle parking spaces, many of them behind plate glass windows overlooking the reception area.

A ramp will enable people to cycle right into the building, which will also have changing as well as bike washing and maintenance facilities. It will also have 10 charging points for electric cars.

The aim is to make it more attractive for people to commute by bike, rather than car.

Andreas Solaas of developers Entra said: "There are several trends pointing in that direction.

"The political leadership in Oslo is crystal clear on [having] large ambitions for increased use of bicycles. Employees are making commuting their daily workout through cycling."

The building has been designed under the country’s FutureBuilt programme which showcases 50 projects aimed at reducing the carbon footprint of new buildings.

In the case of Oslo Solar that’s not just through encouraging sustainable travel but also, as the building’s name implies, using solar energy harnessed through 8,300 square metres of panels on its roof.

It will also collect rainwater for uses such as watering plants in the building, and will provide a habitat for wildlife such as bats and birds on panels filled with moss in a central atrium.

"We see numerous initiatives to reduce this sector's carbon footprint.

“Being in the forefront of this development gives us a competitive advantage, our customers are valuing it, and it is absolutely necessary to combat climate change. So yes, energy-positive buildings will be more common in the future."

Closer to home, businesses that have backed London’s Cycle Superhighways and other infrastructure in the British capital have highlighted the benefits of cycling to their employees.

Meanwhile commercial property firms say that secure cycle parking is now one of the key demands from potential tenants of new office buildings in the city.