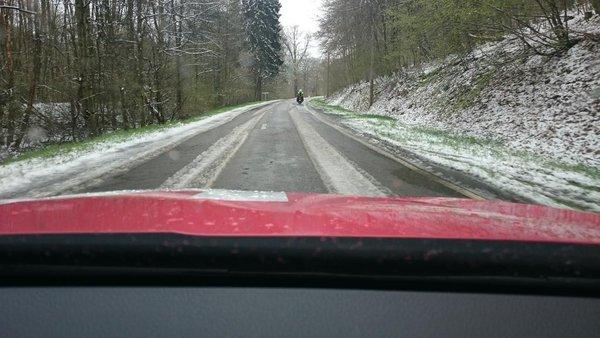 Liège-Bastogne-Liège shortened due to snow

The route of Liège-Bastogne-Liège, the Ardennes Classic taking place this afternoon, was changed by organisers due to treacherous conditions caused by snow.

The change of course took place while the race was under way, with organisers saying: “Due to the hectic weather conditions, the race organisation has decided to change the planned course.

“Indeed from km 45 to km 75, the riders will head south and return to the normal course just before the first climb of the day, the Côte de la Roche en Ardenne.”

In a nod to the much anticipated premiere of Season 6 of Game of Thrones, they tweeted:

Even if #GoT is back today, there are no White Walkers along the route of @LiegeBastogneL (...for now) #LBL pic.twitter.com/iZVeKWEO6x

A number of teams including Sky and Katusha tweeted pictures and video from their cars to show just what the conditions were like.

It's a whiteout at #LBL on the way to the first feedzone. Tough conditions out there pic.twitter.com/utmN7xBEEm

#LBL This is already a bit dangerous... pic.twitter.com/AJy1aasZLA

An indication of how tough conditions during the early part of the race have been came with the news that with around 100 kilometres still to ride, around half the 200 starters had abandoned the race.

Images of the snow covered roads evoke memories of 1980, which began in a snowstorm and ended with Bernard Hinault winning after a solo ride of 80 kilometres – and in the process, permanently losing the feeling in a couple of his fingers.

In 2013, the route of Milan-San Remo was shortened while the race was in progress due to a snowstorm which made it impossible for the riders to get across the Passo del Turchino, with team buses taking them down to the coast via a motorway to resume the race.