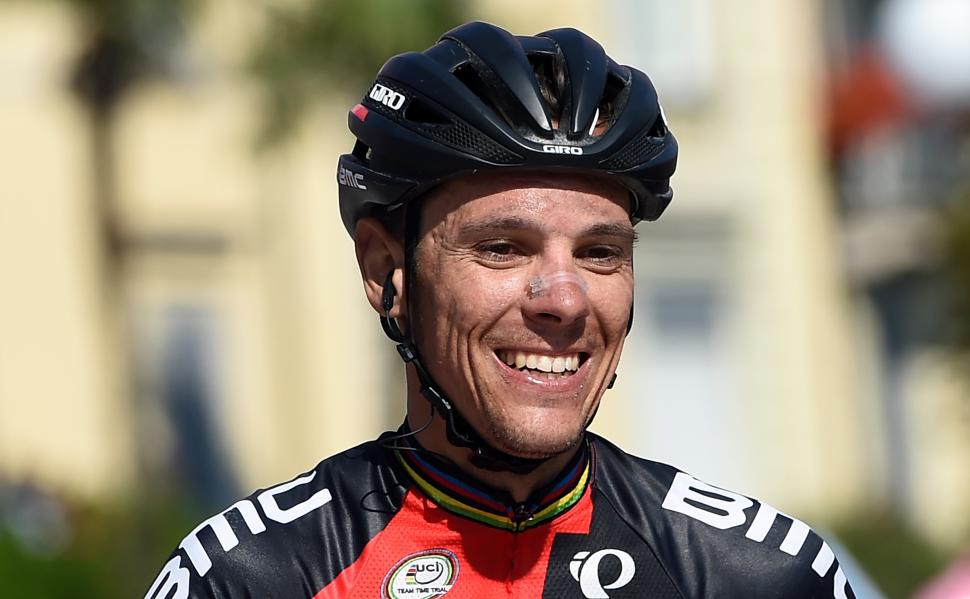 Back and finger injuries put BMC Racing rider out of his 'home' race...
by Simon_MacMichael

Former world champion Philippe Gilbert will miss the last of the Spring Classics on Sunday, Liège-Bastogne-Liège due to a back injury and the broken finger he sustained in an altercation with a car passenger earlier this month.

Held on the roads Gilbert grew up riding, he won the race in 2011, but his BMC Racing team says that with the Giro d’Italia just a fortnight away, it has been decided that he should focus on being fully fit for that race.

Team doctor Max Testa said: "After evaluating Philippe's condition today, including his fitness level and the pain from his fractured finger, we agree that it is in his best interests to skip Liège-Bastogne-Liège.

"In Amstel Gold Race and La Flèche Wallonne he hasn't been able to sit straight on the bike which has caused some back issues and early onset fatigue on the bike. After discussing with Philippe and team management we all agree that it is in his best interest to focus on his recovery before the Giro d'Italia which is only two weeks away.

“Realistically it doesn't make any sense to take the risk of a crash or worsening of his back pain on Sunday."

Gilbert, who in 2011 became just the second rider to win Amstel Gold, Flèche Wallonne and  Liège-Bastogne-Liège in the same season, said: "The pain from my fractured finger and the side effects this creates, including changing my position and being twisted on the bike, means it's not comfortable to ride, let alone race at this intensity.

"After giving it a go in Amstel Gold Race and La Flèche Wallonne, I have to be realistic and focus on my recovery and getting back in shape for the Giro d'Italia.

“I can't race to the best of my ability or even help the team, so I'll head home to Monaco and recover well in the good weather and be back on my usual training schedule as soon as possible," he added.

Gilbert won two stages in last year’s Giro d’Italia. After the second of those victories, in Verbania, his was one of the bikes checked by the UCI for hidden motors.

As we reported yesterday his agent, Vincent Wathelet, believes concealed motors have been used in the peloton since before 2010, the year when rumours of mechanical doping began circulating in earnest.

The BMC Racing rider’s broken finger resulted from an altercation with a car driver and passenger when he was on a training ride earlier this month, with Gilbert potentially facing prosecution for allegedly being in possession of pepper spray.