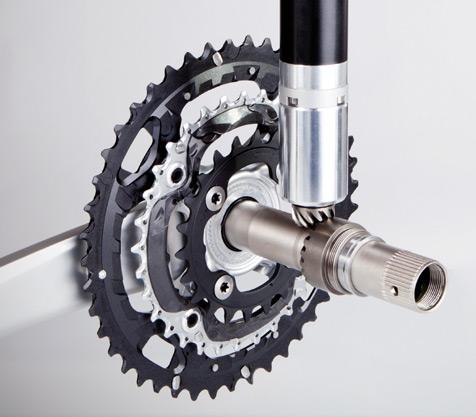 The agent of former world champion Philippe Gilbert and Milan-San Remo winner Arnaud Démare claims that electric motors have been used in the peloton for much longer than 2010, the year rumours began about them following Fabian Cancellara’s emphatic wins at the Tour of Flanders and Paris-Roubaix. He has also called for non-essential bike changes during races to be banned.

Vincent Wathelet, who also produces TV coverage of cyclo-cross races, says he has raised concerns on several occasions with the UCI and others, and believes the governing body’s scanning technology is incapable of detecting the latest generation of motors.

His comments follow the results of an investigation by the French TV show Stade 2, working alongside Italian newspaper La Corriere della Sera, being broadcast on Sunday Evening.

The segment included an interview with Hungarian engineer Stefano Varjas, whom Wathelet said “a very long time ago ... approached a rider I am close to telling him he had lost numerous races compared to his rivals since they were using motorised bikes.”

Varjas showed Stade 2 a small motor, 5cm in length, something Wathelet said he had been shown three years ago, leading to him putting together a bike furnished with banned equipment to show the UCI how it worked.

“People talk a lot about 2010, but I even have evidence that it’s been in the peloton for much longer than that,” continued Wathelet, who said that he had also had concerns about the use of concealed motors in World Cup cyclo-cross races for which he produces TV coverage.

One rider he had concerns about at such events due to the apparent ease with which they tackled climbs was Belgian under-23 rider Femke Van den Driessche.

After a bike prepared for her at the Cyclo-cross World Championships at Zolder in January was discovered to be equipped with a hidden motor, footage of the 19-year-old distancing some of the world’s top riders at last November’s Koppenbergcross gained widespread attention.

Wathelet said he had reported his concerns to Umberto Langelotti, president of the Monaco cycling federation, whom he said supported him “100 per cent” and had raised the issue at UCI meetings, helping lead to harsher sanctions being introduced by the governing body last year for what it terms “technological fraud.”

He believes that the use of electronic shifting “greatly facilitates cheating since there is already a battery and therefore power.”

But he described the UCI’s scanning technology, which has so far led to the discovery of one motor-equipped bike, as “a toy,” instead advocating the use of thermal imaging equipment similar to that deployed by Stade 2 and the Corriere della Sera in their investigation.

"Thermal imaging cameras are the only way to demonstrate that a bike really does have an abnormal source of abnormal energy,” in other words through the use of batteries.

Are €200,000 motors similar to those in satellites now being used on bikes?

He maintained that the hidden motor found in the bike prepared for Van den Driessche at the Cyclo-cross World Championships in Zolder in January was a “first generation” device costing €7,500 but new, “very sophisticated” motors cost between €50,000 and €200,000.

The latter, he explained, “are used in the aerospace industry to open the shutters of a satellite when it is launched into orbit, so you can imagine how powerful and durable these engines are. It also means these kinds of materials, which cost a lot of money, are not easily recognised by a scanner.”

Such motors, he said, could be triggered by a rider’s heart rate exceeding a certain level – 160 beats per minute was the typical threshold he gave – allowing them time to recover.

Wathelet also turned his attention to the allegation in the Stade 2 report that some riders might be using remotely activated electromagnetic technology within the carbon rim of a rear wheel to gain an illegal advantage.

"During the last Tour de France, I was shocked to find out that some teams – and not minor ones – removed wheels the moment a rider crossed the line who then, on home-trainers, [warmed down] using bicycles without wheels. This makes no sense to me.

“I’ve alerted the authorities, I’ve alerted lots of people, but sadly you always have to wait for someone to get caught in the act to get a real reaction.”

He acknowledged that it is difficult for the UCI to respond quickly, however, against the use of concealed motors, which he described as “cheating in its purest form.

“With mechanical doping, the problem is that you need to deploy substantial resources to be able to catch riders [who are cheating],” he continued. “You have to have letters rogatory [ie formal legal authority] to dismantle a bike. It’s not very easy from a legal point of view.”

So what is Wathelet’s solution? “We have to look at performance as well as physical parameters,” he explained. “When you see an incredible cadence on a high altitude climb coupled with a low heartbeat, in my opinion, it’s clear that cheating is going on.

“It’s a rule of three – the heartbeat, the cadence, and the gradient. But as I’ve said, that’s not enough. In this case, we also need the full machinery of the law to be deployed so the bike is seized, that spare bikes be seized too, that there is no possibility of mechanics getting close to the bikes.

Among the issues that gave rise to suspicions that Cancellara used a hidden motor in the 2010 Tour of Flanders were two bike changes during the race that did not appear to be due to a mechanical problem.

Other riders whose bike changes have attracted attention include Alberto Contador during last year’s Giro d’Italia, with Mario Cipollini saying on Italian television that a bike swap during Stage 5 to Abetone helped fuel suspicions of mechanical doping.

Later in the race, which ended with Contador taking the overall victory, another bike change before the ascent of the Mortirolo was the subject of speculation in French newspaper L’Equipe, and after Stage 18 to Verbania his bike, as well as those of other riders including stage winner Gilbert, were checked by the UCI.

While one reason for a mid-stage bike change may be due to gearing – when a tough climb comes at the end of a long, relatively flat stage, for example – Wathelet believes such practices should be banned.

“Above all in future we need to outlaw bike changes other than for serious mechanical reasons,” he said.

“I don’t think we can accept any more the continual changes of bikes during races, since afterwards one automatically thinks there has been cheating.”