A study in Cambridge has found “eighty-five percent of the effect on increasing cycling was explained by use of the infrastructure”.

The natural experiment study, which was one of the first of its kind to examine how environmental changes influence changes in physical activity, compared commuting data between 2009 and 2012 based on how close people lived to new cycle infrastructure, in this case the Cambridgeshire Guided Busway.

Funded by the Medical Research Council, the study compared data from the 2009 and 2012 commuting and health in Cambridge natural experimental study, with follow-up assessments in 2010, 2011 and 2012 asking participants if they had walked or cycled on the path beside the guided busway.

The researchers looked at:

Outcomes were modelled as an increase, decrease or no change in weekly cycle commuting time.

While perceptions of the commute, and motivational factors, didn’t explain the effects of new infrastructure on cycling, only the use of the route itself explained the increase in cycling (see table, below). Work started on the busway, which links towns and villages to the North West of Cambridge with the Cambridge Science Park, the city centre and Cambridge Biomedical Campus, in 2007 and was completed in summer 2011. 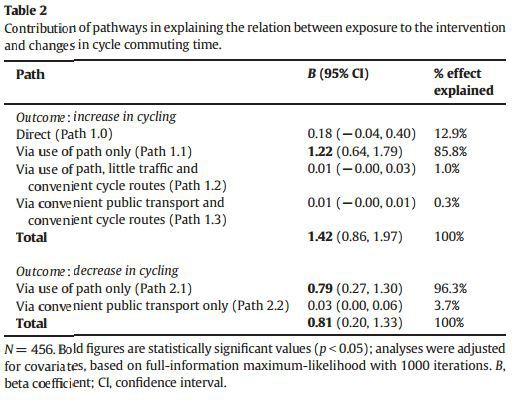 The study notes the health and environmental benefits of cycling, and compares low cycle usage of the UK, Switzerland, Canada and the USA, with countries such as China, the Netherlands, France and Germany where more than 30% of people travel to work by active means (walking and cycling).

It concludes changing the environment, i.e. introducing new cycle infrastructure, means people cycle more – with associated health benefits. One interesting finding was that existing commuters who lived near the busway spent less time cycling, researchers posited either because using public transport became more convenient or because it seemed like their journeys were shorter, or they were shorter because of fewer junctions and consequently higher speeds.

The report concludes: "Although it is important for causal inference to understand the pathways by which an environmental intervention brings about its effects (Rothman and Greenland, 2005,Rychetnik et al., 2002 and Victora et al., 2004), there is a lack of research on such pathways from intervention studies. We are only just beginning to understand the pathways by which environmental changes may bring about changes in physical activity behaviours."

"To conclude, we found that exposure to the intervention led to an overall increase in the time spent cycling on the commute, mainly through use of the new infrastructure for cycling. "

“The findings give a clear message to the Department for Transport: if David Cameron wants to realise his ‘cycling revolution’, there is no more effective way than committing meaningful investment into cycle friendly infrastructure,” he said.

Guha suggests diverting some of the government’s £15bn roads fund, or the soon to be introduced Sugar Tax, to bring spending for cycling up to at least £10 per head per year, from its current £1.39 outside of London.

He adds: “We are continuing along a trajectory towards a high-carbon, low-active travel transport system. The Government has expressed a commitment to reducing obesity in the UK, to combating climate change and to reducing air pollution. All the evidence is stacked up in favour of improving cycle infrastructure, and Cycling UK will continue campaigning until we have Space for Cycling for everyone, not just a few cities.”