Creme Cycles 2011 - urban bikes with a shot of coffee

Pretty bikes at pretty good prices coming soon to a street near you?
by Tony Farrelly

New bike brands don't come along that often and certainly not ones with a complete range of bikes and a story to tell… they certainly don't launch just a few miles from the road.cc office either, no surprise then that UK launch of new urban brand, Creme Cycles caught our eye. So it was off to Bristol for a shufty.

Creme is an offshoot of the Polish dirt jump brand NS, we featured their fixed freestyle bike on road.cc a few months back. According to Creme boss Szymon Kobylinski a range of city bikes was the logical next step, and given the fact that guys behind NS had a background in both riding and design – they wanted to make beautiful bike that ride well too. They certainly got the first part right, and only a test ride will confirm if they made it two out of two. Their range is divided into three distinct strands the sit up and beg Dutch-style Holymolys, the more performance oriented, but still practical Caferacers and the Vinyls – out and out urban speed machines. All three strands have matching his or hers bikes except the Vinyls – speed being gender neutral and all that. All of the frames are made from lugged steel in Vietnam then painted and assembled in Poland, the finishing kit looks top quality too even on the more basic models with brands like Brooks and Selle San Marco making an appearance further up the price points.

Coffee plays a big part in all of this… the analogy Creme use to describe what they are all about is that their bikes are like an Italian espresso "simple, popular, but when each one is made with love and care, it becomes a small work of art."

And they take the coffee theme further dividing each of the three strands in their range into Solo or Doppio bikes – think espresso, single shot and double. The Solos are the more basic versions with the Doppios getting the full bells and whistles in terms of finishing kit and frame materials. All the bikes are made from Chromoly - with the Solos being plain gauge while the Doppio's are double butted – Tange Prestige in the case of bikes like the Doppio versions of the Vinyl. So let's take a closer look at the bikes… These are the machines that Creme think will prove most popular, practical bikes with a performance edge, those racks will take a reasonable weight – you wouldn't go world touring with them but they'd be more than capable of lugging a bit of shopping home after work. You get a choice of either singlespeed/ fixed versions: the Solo Black and the Doppio Bronze weighing a claimed 12.5Kg and 12Kg respectively; or hub gears the Solo Raceblue sporting a Nexus 3-spd and the Wenge a Nexus 7-spd. Both the hub geared machines have Italian made chainguards and as you'd expect they are heavier than the singlepseeds with claimed weights closer to 15Kg. All the bikes come with stands and LED Smart lights front and rear and all are equipped with Schwalbe Road Cruiser tyres - which should take the sting out of any potholed city street. Prices range from £524.99 for the men's singlespeed Caferacer Black Solo through to £849.99 for the Nexus 7-spd Wenge model. 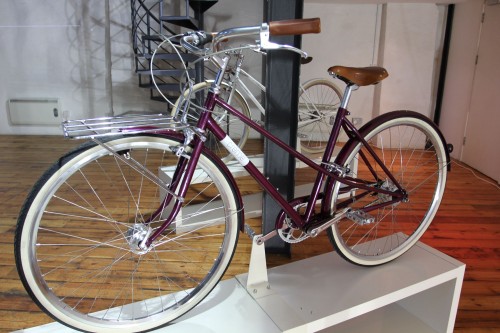 The women's Caferacers are less, well racy going for a more step through approach with a double top tube, they dispense with the singlspeed option too offering either Nexus 3-spd or 7-spd gearing. So far so stylish, and the Caferacer's certainly seem equipped to deal with the demands of urban cycling, the one thing I had my doubts about was the width of those risers bars… they are wiiiiide, not what you'd need for filtering through traffic or tight turns in confined spaces. Interestingly we know of another range of urban bikes also slated to hit the streets soon that also have very wide bars, like Creme they also have mountain biking in their DNA (well okay, in NS's DNA) where wide bars are the fashion of the moment. Creme though would seem to have this base covered as Simon pointed out their bars are easy to cut down to a narrower width. Just as well because the Caferacers all match quill stems and riser – a difficult combo to match up apparently. Although the Italians are pretty good at it as we saw on the Rossin bikes at last year's Milan Bike Show. 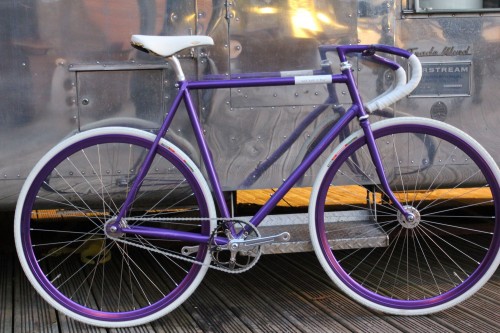 Now these are the bikes that we reckon Creme could score big with, the Vinyl's look extremely stylish in either Doppio or Solo guises and they are attractively priced too. Those drop bars look good but they aren't that pracitical for carving through the urban traffic - Creme have thought of that though, every bike comes with a set of risers in the box too. They also come with brakes - Promax 462 Callipers and, another nice touch, removable cable guides. Pedals are VP clips with leather straps - in keeping with the full on retro track feel (well, with those drops on anyway) someone's parts bin has been raided for the 1in quill stems. 400mm chainstays should make for immediate power transfer. Seat angles are 74° on all three sizes but with proportionate 72.5, 73, and 74 degree head angles depending on size. All come with a 44 - 16 drivetrain. The Vinyl comes in a choice of our colours, two Solo models the Espresso, the black bike we've got shots of, and the Mercury in a polished finish; on the Doppio side you get the choice of the Champagne, with gold polished rims, bars, stem, and cranks or the Ultral Violet. The differences between the Solos and Doppios amounts to butted frames for the latter and uprated finishing kit - Creme forged cranks replacing Lasco ones on the top end models along with Selle San Marco Rolls saddles instead of Velo VLs with a microsuede cover. All that amounts to an weight saving of 300g with the Vinyl Doppios weighing a claimed 10.1kg (22.2lb) while the Solos come in at 10.4Kg (22.9lb). Prices range from £569 for the Vinyl Solo to £769 for the Doppio - which unless you really want that finishing kit does make the Solo look the better bet.

More Creme to on its way… you can also check out www.cremecycles.com