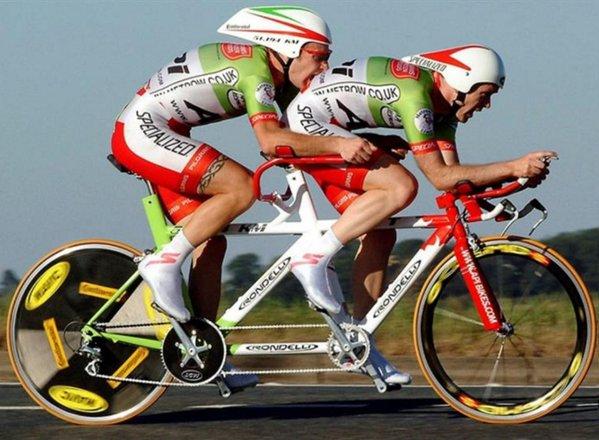 Police in Kent are searching for a totally unique tandem racing bike that was stolen in a house raid in Chestfield during the week of March 22.

The custom tandem was among £10,000 of belongings, with enormous sentimental value to its riders, who say it helped to win a national championship.

The theft took place at the home of Nick Green, who along with Luke Higgins, rode tandem from Land's End to Whitstable in under 24 hours in 2013, on a 70-year-old bike.

The couple, who had been in training for the new season, will now have to abandon their plans.

Luke, 35, a kitchen designer, told Kent Online: “It’s a massive blow because the bike has a long racing pedigree.

“We don’t believe the thieves specifically targeted it. They took electrical equipment but I think they stole the bike just because it was there and looked a bit special.

“It is such a specialised piece of kit that it will be of no use to anyone else, and is so distinctive that it will be impossible to sell on in the cycling world. It’s certainly no good as a family cycle.

“Our hope is that they realise that and dump it somewhere so it can be found and returned.”

The stolen custom tandem, a red and white Rondelli, worth £8,000, was on loan to Luke and Nick.

Luke said: “It is of great sentimental value too because it was ridden with great success in the past by Zak Carr, who won many titles on it and was a bit of a legend in the tandem racing world.

“Sadly he was killed in a road accident a few years ago.

“Obviously, we are very sad and angry, and can only hope someone spots the bike because it is so recognisable.”