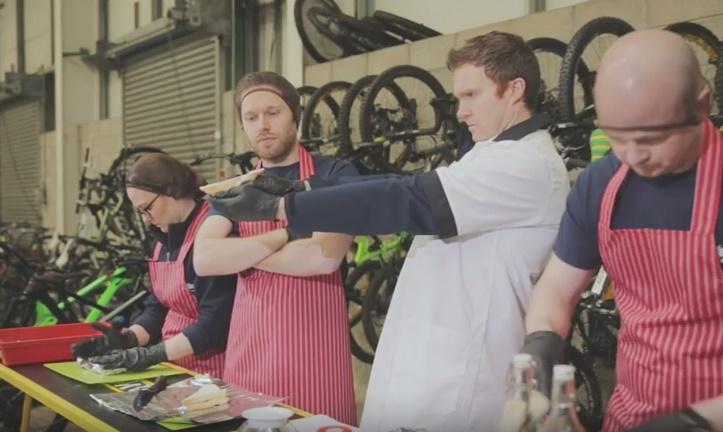 Some funny, some not, some maybe actually slightly offensive
by Alex Bowden

April Fool’s Day’s always a bit of a mixed bag. Some spoof stories are obvious, others could well be true, while the best are usually somewhere in between. Here’s some of the cycling-related April Fool’s Day stuff we’ve happened across today.

Topical and with just the faintest hint of plausibility, we think this is a good one. What else would infamous motor-assisted cyclo-cross rider Femke Van den Driessche be planning to do with her time?

Wholesome on-the-go snacks for cyclists. “We think the CRC jam sandwich is a game-changer.”

“We started to receive more and more requests as the months rolled on and, not wanting to disappoint, we thought it only right that we bring our cycling community closer to what they really want to know about. From the legendary Angus to the Charolais or Italy’s 25,000 year old muscle bound Piedmontese, with literally hundreds of breeds to discover we’ve got enough material to keep us in business until at least 2025 and beyond.”

What do you make of these two stories? Australian website, Car Advice, goes with the premise that all vehicles should be subject to the same rules and penalties, suggesting that some bikes could be impounded or crushed due to their owners’ behaviour.

Ploughing a similar furrow, South African site IOL claims the government is to introduce bicycle MOTs and registration as well as cycling licences.

“The time has come for ROTOR to reveal more information about its highly-anticipated UNO group set. Today ROTOR announced that after conclusive testing that proved successful, the unprecedented system will use Spanish olive oil for its shift actuation.”

"We saw significant improvements in shift performance," said Wolfgang Turainsky, UNO team liaison. "We also found that the olive oil allowed us to create an even tastier and crisper shift sensation."

“This seems like the natural progression to take with insurance. By providing a Bikmo drone to all of our customers, we’re simplifying their riding experience and eliminating the worry around crashing and theft. Also, like the black box car insurers provide, our drones can monitor riding behaviour and reduce premiums accordingly.”

Bikmo also suggest that at a later date the drones will have the ability to 3D print small components at the roadside.

Why stop at three?

Inspired by the popularity of fixies, the MINI Hipster Hatch has just one forward gear.

“We removed four of the forward gears to give you a greater feeling of control when you’re popping out for a superfood smoothie.”

If you’re not yet worn-down by all of this, here are some of last year’s offerings.

And then there's that story about Dan Lloyd signing for Team Dimension Data that we reported on earlier...