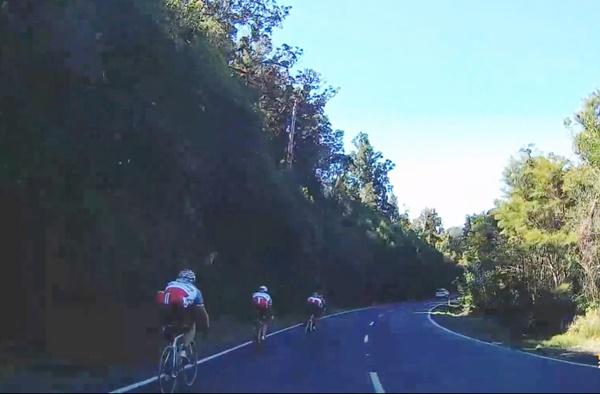 An online video apparently depicting a driver screaming at a group of New Zealand cyclists while driving behind them has been revealed to be a fake. After investigating, police said it was an actress's voice which was later dubbed over footage filmed from the car.

The video, uploaded to YouTube by someone with the user name Samanthapants, is striking for its ferocity. “Don't f***ing test me if you aren't prepared to f***ing die," being just one example of the kind of thing it contains.

The video appeared on a number of mainstream news sites. Wayne Attwell, one of the cyclists featured, saw it and subsequently submitted helmet cam footage to the police, believing that the driver could be identified.

The uploader was tracked to a Wellington address and Attwell told The Age: "It's a hoax. It was a guy who produces viral videos for a living and gets paid per click."

"I'm fuming, man. I have talked to cyclists around the traps and it has scared the bejesus out of them. I can't believe there is someone who would do this all for a money-making scam. The police are taking it pretty seriously."

"Although he won't be charged in terms of offending under the Land Transport Act, our prosecutors are looking into other areas to see if offending has occurred.

“I'm disappointed that someone would upload a video with that level of aggression against legitimate road users purely for entertainment purposes. We only have one roading network, we all need to use it."

A man claiming to be the video creator has since spoken to youorig.com. Going by the name Steve, he said he was surprised by how much anger the video had given rise to.

“The police were called to my house looking for a woman I had created. I created her Facebook page, I created her name and hired an actor to do a voice over on a dash cam video for $50.

“I never expected the video to get this much attention, her created fake Facebook page has received death threats from cyclists all over the world. I think I created the most hated person on the planet this week. I hope the student who did the voice over gets offered a movie job out of it, if any one should win a Oscar it should be her.”