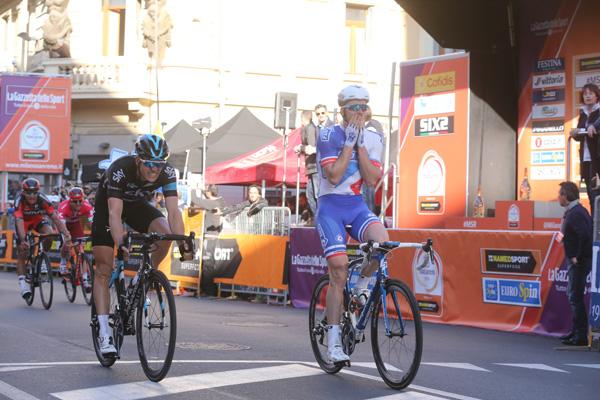 French rider Arnaud Démare has won the 107th edition of Milan-San Remo, the first Monument of the season. The FDJ rider becomes the first French winner since Laurent Jalabert in 1995 after edging out Ben Swift and Jurgen Roelandts in a sprint finish from a reduced front group.

The day’s break was mopped up with 25km to go and shortly afterwards, Ian Stannard attacked on the Cipressa. By the descent he’d been joined by four other riders – all Italians – but they were caught before the Poggio.

On the Poggio, Stannard’s Team Sky team-mate Michal Kwiatkowski attacked and he was chased by Vincenzo Nibali who stretched out what remained of the peloton on the descent.

A series of attacks from the likes of Fabian Cancellara saw Kwiatkowski overhauled and Edvald Boasson Hagen then took the front with a kilometre to go. Milan-San Remo’s traditionally ragged sprint then saw Démare prove himself the quickest, although Fernando Gaviria fell, while Nacer Bouhanni appeared to suffer a mechanical problem.

Swift was unable to get past Démare, despite being well positioned, but secured his second Milan-San Remo podium place after finishing third in 2014.

Speaking after the finish, Démare said:

"There are days like this one in which everything works despite the occasional hiccup, like crashing at the bottom of the Cipressa. I made it across at the bottom of the Poggio and the entire way I felt fantastic. I became the under-23 world champion in similar conditions after crashing. I'm delighted to win Milano-Sanremo. This is a big one and has been running for over a century. It's extraordinary. I'm extremely happy."

Earlier in the day, the race had to be diverted along the A10 following a landslide on the Via Aurelia. The incident, which took place at around 10.45am, saw several parked cars hit by falling rocks and two tourists injured.