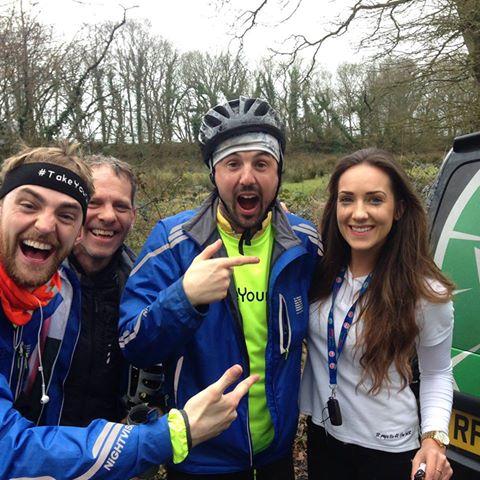 A cyclist taking part in a John O’Groats to Land’s End charity ride has described how he and fellow riders thought they had stumbled into a kidnap situation when they rescued a woman trapped in the back of a van after hearing her cries for help.

Jamie McDonald, who was participating in the end-to-end ride with a group from Unite Students to raise money for Sport Relief, posted to Facebook to try and discover the identity of the woman to find out if she managed to get home okay.

She turned out to be Gemma Lloyd from Worcester, who had been trapped in the van for more than four hours after the wind blew the doors shut when she went to get a pen from the back.

With no way of getting to her mobile phone which was in the front of the van and no internal handles to open the rear doors, she told the BBC that she had been “really overwhelmed” when the cyclists arrived to free her.

Writing on Facebook about the incident, which happened in Devon on Tuesday, Mr McDonald said: “A small group of us broke away when we heard cries for help from the back of a van in a quiet wooded area just off a stretch of road near the border of Cornwall.

“As you can probably imagine, as we got closer and realised it was definitely a woman banging on the doors of the back of a van and screaming for help, we were scared ourselves. My imagination leapt to somebody being close by. A few of us thought we might be dealing with a kidnapping – it really was frightening.

“Opening the van doors, we found the girl in the photo, who told us she’d been stuck in the back of the van in darkness for more than four hours, shouting and banging that time.

“She’d been crying and said she’d begun to consider the possibility of never getting out,” a prospect that he said must have been “absolutely terrifying.”

He added: “There’s no telling, as this was pretty much the middle of nowhere, how long she might have otherwise been locked in the van. I’m just glad we were passing by.”

The cyclist and his companions posed for a photo or two but didn’t swap contact details before setting off to finish the day’s riding – they finally arrived at Land’s End yesterday – hence the social media appeal to try and identify the woman they had helped so they could ensure she was okay.

Aged 32, Mr McDonald, who lives in Gloucester, spent the first nine years of his life in hospital due to a spinal condition and having determined to give something back, co-founded and helps run the Superhero Foundation charity.

His fundraising initiatives have included riding from Bangkok to Gloucester on a second-hand bike that cost just £50 and setting a Guinness World Record for a marathon 12-day static bike ride.

He also became the first person to run coast-to-coast unsupported across Canada – a distance of 5,000 miles and an achievement that raised £250,000 for charity.