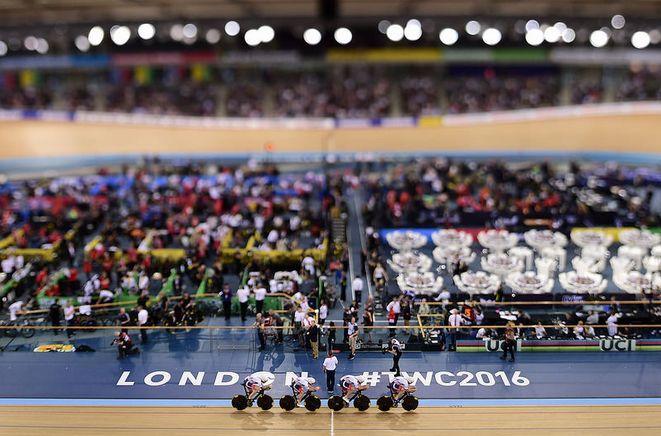 Former world and Olympic champion Chris Boardman says that tensions between some of Great Britain’s track riders and coaching staff are part and parcel of the sport, particularly in an Olympic year, and that “everybody’s under pressure.” Meanwhile team boss Shane Sutton has said he should be judged on the team's performance at the 2020 Tokyo Olympics rather than this summer in Rio.

His comments, made as the UCI Track World Championships began in London yesterday, came ahead of Jess Varnish and team sprint partner Katy Marchant launching a stinging attack on their coaches after they failed to qualify last night for the Rio Olympics.

They come as some of the riders who helped Team GB win seven Olympic golds in London four years ago are set to come away from a home world championships without a medal of any colour in the same events.

Those are the men's pursuit team and - missing out on the medal races as this article went to press - the once all conquering women's pursuit squad, who can finish no higher than fifth, prompting the question of whether the wheels have come off at the national team.

It doesn't bode well for Rio this summer - although Great Britain Cycling Team technical director Shane Sutton has said he should be judged not on the forthcoming Olympic Games, but on Tokyo 2020.

Speaking to road.cc at the Lee Valley VeloPark yesterday, Boardman, who led the ‘Secret Squirrel Club’ that was a major factor behind Team GB’s success in the Beijing and London Olympics, said: “Everybody’s under stress now. This is the no excuses year. Most Olympic Games we can say afterwards that it’s restructuring, but this is it now.

“It sounds very clichéd, but like football, this game is about results, this is the year when the ‘whys’ don’t matter, it’s the ‘whats’ we’ve got to produce.

“Everybody’s under pressure. The athletes are getting nervous and tetchy, and coaches are desperately trying to force results as well,” he added.

Great Britain’s pairing of Marchant and Varnish needed to finish two clear places above France to qualify for Rio, having failed to secure sufficient ranking points before this week’s event to be assured of a place

While they finished five, France were seventh, meaning Great Britain won’t be in the event in Brazil, while  the country’s last world championship success in the event remains that of Victoria Pendleton and Shanaze Reade at Manchester in 2008.

"No fault of our own," insists Varnish

Interviewed by the BBC at trackside last night, Varnish was highly critical of the way she believes the team’s management has tinkered with the squad, which she insists has made it impossible to perform consistently.

“I feel sick. We have been basically playing catch up through bad decisions and bad luck,” said the 25-year-old, who missed out on the chance of an Olympic medal at London 2012 after she and Pendleton were relegated for an illegal change in the first round.

“How many more times can I keep putting my life on hold, making these choices for my career, if it’s not going to pay off, through no fault of our own?

“There’s been people put out for races, say the European Championships last year … it’s great they’ve been given an opportunity in major championships and to try to qualify the ‘A team’ for a place at Olympic Games, but they’re not there yet.

“This is through absolutely no fault of our own,” she added. “We’re fifth in the world, we’ve beaten so many of the teams, this is the best we’ve ever competed and we’re not going to the Olympics.”

Marchant said she felt "a lot of frustration, disappointment, disappointed in the organisation. We're in this position through decisions of other people, not through any fault of our own.

"We've given everything. We've done everything we've been asked of. To be fifth in the world and not ride in the Olympics, I've got no words. It's heartbreaking."

Sutton: "They've not been good enough"

But Sutton maintained that Varnish and Marchant as well as other members of the women's team sprint squad needed to take collective responsibility for their own performance.

The Australian, who succeeded Sir Dave Brailsford in early 2014 after the latter decided to focus full-time on his role with Team Sky, said: “That was a brilliant ride by them, a personal best, and it shows how they have progressed under their new coaches.

“But this programme is about taking ownership and looking at the group, they’ve collectively not qualified. They’ve not been good enough.

“A big factor in this is Becky James being out for so long, that’s been a drain on resources and in certain World Cups we’ve fielded different line-ups,” he continued.

“I’d like to think every athlete on the programme would take responsibility for their performances. The resources put into them are unmatched and to shift the blame is unfair on the support services around them. But you have to remember that emotions were running high.”

Sutton has come under criticism from other Great Britain riders in recent days, however. Double Olympic champion Laura Trott defended fellow team pursuit rider Katie Archibald after it emerged that injuries she sustained before Christmas were due to a motorcycle crash, with her decision to ride one so close to Rio described by Sutton as “crazy.”

And Trott’s fiancé, Jason Kenny, who also won two gold medals at London 2012, last week said that Great Britain’s track riders were “treated like kids.” While he has the chance to go for a third successive team sprint Olympic gold at Rio with qualification already secured, the country’s men finished a disappointing sixth.

“If we aren’t and they [British Cycling] feel there is someone who can do a better job, then that is up to them. I’ve got no problem with that. But I’d like to feel I can get to Tokyo because that is where I feel my work will shine through.”

Two days in to the World Championships and it seems inevitable that some will already be questioning whether Sutton's work will get to 'shine through' in Rio let alone Tokyo.

"It's very easy for tempers to flare," says Boardman

Referring to Sutton’s criticism of Archibald – and Trott’s subsequent defence of her team mate – Boardman said: “I don’t think you can doubt the commitment of any of them but it’s very easy for tempers to flare and for coaches to say you shouldn’t do this and shouldn’t do that, which is their job, and athletes will rail against that.

“I think it’s important to remember that athletes, by definition, are young people, so they are going to ride motorbikes, and you’ll probably ask them in five years and they’ll go ‘oh, yeah, that was a bit daft.’

“That’s part of what being young is and you cannot live in isolation, you can’t not have a real life because then you wouldn’t be able to sustain this, so it’s important that you can go and do some daft things, but equally the coaches’ job is to point that out, and they’re not necessarily going to be popular for it,” Boardman concluded.