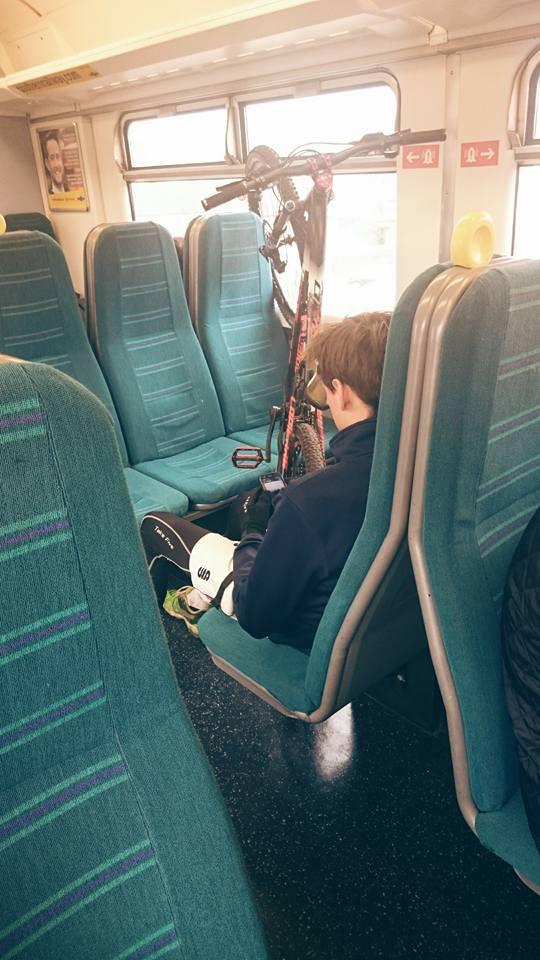 Another cyclist on London’s commuter trains has sparked criticism for taking up six seats for his muddy mountain bike.

Passengers said they were left standing after the man in South Londohttp://www.southernrailway.com/your-journey/cycle-policy/n decided to make an impromptu bike rack out of the seats, and sat oblivious to those standing in the aisle.

The photographer told the Evening Standard: “I travel around every single day, and you see some pretty crazy things but this was outrageous,” she said.

“To be honest, I think it was his first time bringing a bike onto a train.

“At least I really hope it was just his first time. He had actually tried to do something similar in the first set of seats, then oddly decided to go to the next set.

“We thought surely when he realised the first set was a tight fit, he'd move back into the entry way to stand on the side, but no, he just went further into the carriage.

“We live in London. So we see the typical stuff: seat bags, manspreading, et cetera. This was a first!”

One Facebook user, who saw the post online, said: “I've never understood why they have a bike and take the train. Use the bike!”

It comes just a week after we reported that a cyclist on a busy late night train who decided to give his precious set of wheels two seats to themselves sparked a Facebook outrage for refusing to let others sit.

The man was photographed looking half asleep, with the caption “Don't mind me, I'll stand” by Becky Curtin. 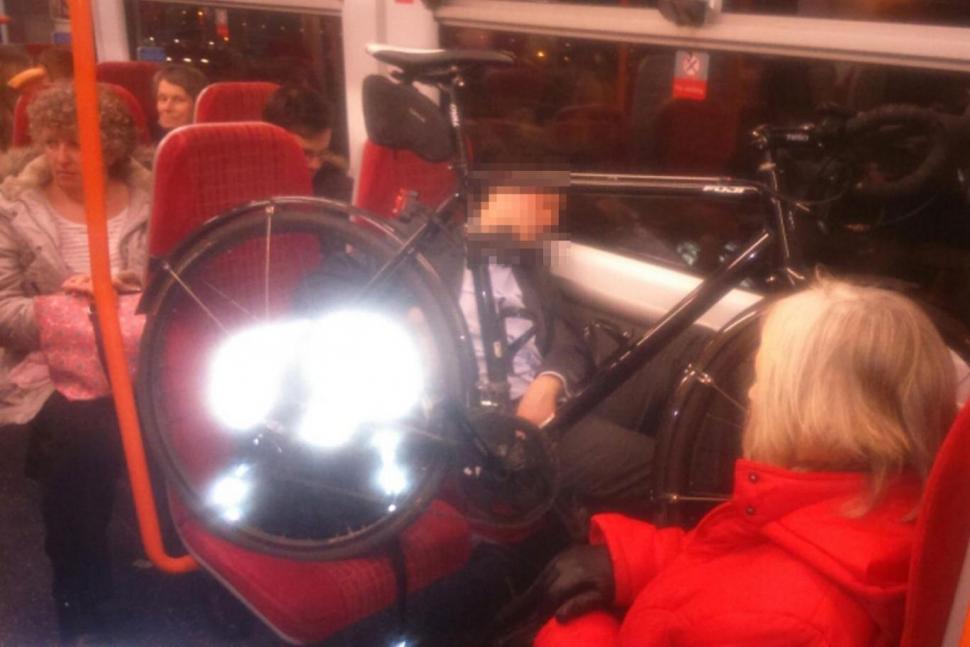 She said that she and her husband and several others were unable to get a seat n the South West Trains service from London Vauxhall to Ashstead at around 10.45pm on Thursday.

Users on Facebook were horrified at the man’s actions.

Jay Cunningham-Pearce wrote: “Please tell me someone said something to him. I can't go to bed knowing he’s still out there thinking this is normal or acceptable.”

“This has angered me greatly,” said another user, Matt Devine, while Ant Ludlow said: “That’s the kind of thing that would have made me have a 'Falling Down' moment.”

Many of you blamed the lack of infrastructure for the problem, with one road.cc user saying: “Bikes and trains ought to be complementary if we planned for a properly integrated multi-modal transport system, but of course there is no incentive for operators to provide cycle space on trains.

“It works just about everywhere in Europe where transport is seen as a vital public service.”

Another said: “It's nearly as bad as one person on their own driving a car built to carry 4/5 people, it's no less selfish than this.”

Another added: “I booked and reserved a cycle space on a train a couple of months back, the train wasn't particularly busy. I boarded with my bike and to my horror found that the cycle space i reserved was in use, not by a bicycle... But by a pram, a dozen shopping bags, and two suitcases, crammed in to above head height.

“I stood with my bike for about twenty minutes until finally a train manager arrived. She then decided that because the family who owned the luggage were rowdy that it was not worth her time, and also told me that I couldn't stand with my bicycle and that id have to get off at the next stop.

“I don't condone what this guy has done, but better infrastructure for cyclists on trains is the way to go. If there is a place on every train for bikes then nobody would be complaining!".

The subject of bike carrying capacity on trains, particularly rush hour trains, continues to be a vexed topic both for cyclists and other rail passengers. In 2012 the CTC published an article, plus restatement of its existing policy regarding bikes on trains, which estimated the demand for cycle carriage at four per cent of total seating capacity noting that: "Theoretically, existing rolling stock is capable of meeting this demand" and calling for newer rolling stock to have increased cycle carrying capacity.

Many UK train operators ban the carriage of non-folding bikes during the rush hour in and out of mainline stations including South West Trains, Abellio Greater Anglia, Southern, in other cases operators limit the numbers of bikes on trains at all times - Northern has a maximum limit of two bikes per train on a first come first served basis.

In other countries the issue is tackled with much greater provision of secure cycle parking at stations - something that is also starting to happen (albeit slowly) in the UK too. Earlier this month Cambridge CyclePoint opened offering an initial 1500 spaces rising to a full capacity of 2850 spaces next month, and with a branch of Rutland Cycles opening on the premises in April.  The CyclePoint
is based on the Dutch model for station cycle parking. There are already existing CyclePoint facilities in Leeds and Manchester - with proposals for more. It is perhaps not surprising that the Northern and Abellio Greater Anglia - the train operators pressing ahead with CyclePoint provision are also wholly or partly owned by a Dutch railway company.