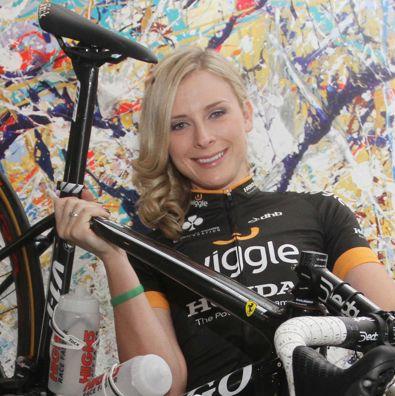 World champion Annette Edmondson says she is hopeful to fly to London on Monday with the Australian track cycling team for next month’s world championships despite being hospitalised following a collision with a car while on a training ride in Adelaide today.

The 24-year-old Wiggle-High5 rider, who won rainbow jerseys in the Omnium and team pursuit at last year’s world championships in Yvelines, France last year, said she crashed into a car on a blind corner just 10 minutes into her ride, reports Adelaide-based newspaper The Advertiser.

She tweeted a picture of the damage the impact caused to both the car involved and her team issue Colnago bike, with the front fork snapping as a result of the collision which happened as she was travelling at 50 kilometres an hour.

Edmondson said: “I was pretty winded and everything hurt so I spent 30 seconds trying to breathe again, but I was in the middle of the road and trying to move.

“A four-wheel drive was coming but was going pretty slow and luckily it stopped.

“I’ve had a few crashes before but never with a car ... and it could have been much worse.

“I went to the RAH (Royal Adelaide Hospital) and all the scans of my neck and back and knee (came back clear) but I’ve got a haematoma on my thigh and a bashed knee, so hopefully when the swelling goes down it’s not too bad.

“I saw our sports doctor afterwards and he said to have a day off tomorrow, go easy the next day and we have our final track session on Saturday before flying out so I’ll see how I feel.”

The cyclist also urged the local council to make the junction safer for both cyclists and drivers, describing it as “a really nasty intersection.”

Earlier this month, she proved her track form by taking two gold medals at the Australian national championships in the scratch race – an event in which she is also the reigning Commonwealth champion – and the points race.