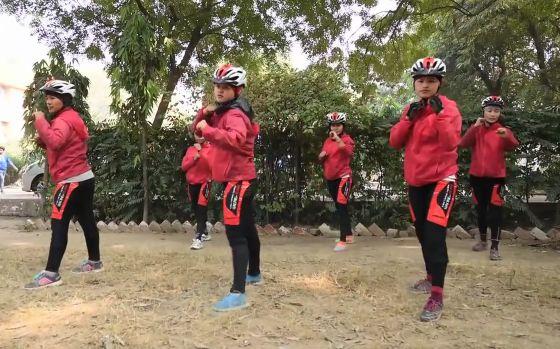 250 ‘Kung Fu Nuns’ have spent the past two months cycling 2,200 kilometres from Nepal’s capital, Kathmandu, to New Delhi in India – and along the way, they have been spreading the message of women’s empowerment and environmental awareness.

Belonging to the Drukpa order of Buddhism, the nuns began their journey from the Himalayan kingdom to India on 18 November, accompanied by two mechanics to service the Chinese-made mountain bikes most rode, reports Livemint.com.

On their journey the nuns, dressed in red and black cycling kit, paused at villages, towns and temples to educate people on environmental issues and gender equality.

The order’s current leader, the twelfth Gyalwang Drukpa, introduced the practice of kung fu to iuts 500 members in 2008, leading to the nuns’ acquiring their singular nickname.

“I started Kung Fu Nuns to establish gender equality,” he explained. “I like kung fu. It is good for meditation and strength—both physical and mental. Also, because many people thought it is a man’s game, I wanted the nuns to learn it.”

Speaking of the ride, which he led, he said: “Kung fu gives them confidence and helps them meditate.

“They were asked a couple of times if they were scared taking up such a long cycle ride. They would say, ‘No, we know kung fu’.

“They are not experts when it comes to cycling. But they are determined and confident.”

During the ride, which the Gyalwang Drukpa is leading, the nuns are continuing their habitual routine of rising early to meditate and pray, as well as skipping one meal a day.

One of them, Jigme Yudron, who joined the order in 2005, said: “We want to show people that we do more than just sitting in the monasteries and meditate.”

The order hit the headlines worldwide after the nuns refused to leave their monastery in the wake of the devastating earthquakes that struck Nepal in April and May last year, claiming 9,000 lives and destroying almost 1 million homes.

“There are lots of monasteries in Kathmandu and when the earthquakes happened, most of the monks ran away to their respective villages,” said the Gyalwang Drukpa.

“Our nuns were the only ones from the community who refused to be evacuated and wanted to support the locals. Locals say our nuns were more aggressive and more capable than even the Red Cross. I was surprised, rather, inspired,” he added.

Following the first of those earthquakes, Nepal's mountain biking community helped out with relief efforts.