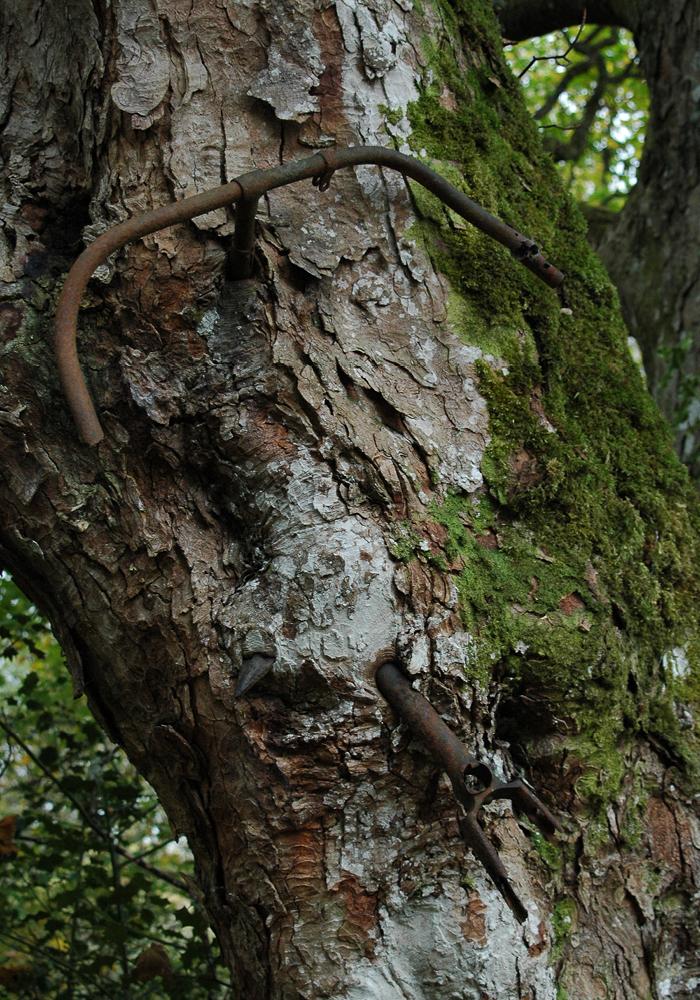 Tree has swallowed bicycle, ship's anchor and horse's bridle over more than 100 years...
by Sarah Barth

An ‘ironivorous’ tree in Scotland has been given protected status - despite it having ‘eaten’ a bicycle.

The ‘metal eating tree’ which is considered one on Scotland’s great curiosities, is located in Brig O’Turk, not far from Loch Lomond.

Situated close to a former blacksmithy, the tree is said to have swallowed a ship’s anchor and chain, as well as a horse’s bridle and most recently a bicycle, whose handlebars and frame appear to be growing out of the trunk.

The sycamore, which dates back to the 1800s, grew through the scrapyard at the blacksmithy and took with it multiple small pieces of metal.

When a local villager was conscripted during World War One, he left his bicycle hanging on a branch. When he failed to return, that too was consumed by the tree.

Loch Lomond and the Trossachs National Park confirmed this week that it had made a Provisional Tree Preservation Order for the tree, at Dorothy’s Field, Brig o’Turk, around half a mile north of the village on the Glenfinglas road.

A spokeswoman told the Scotsman: “The mature Sycamore (Acer pseudoplatanus) has significant cultural and historic heritage which is recognised locally, regionally and nationally.

“The tree has been recorded on a number of veteran tree surveys such as Loch Lomond and the Trossachs Countryside Trust 2013 and Woodland Trust ‘Ancient Tree Hunt’ 2009.”

A tree preservation order would protect the tree in the event of any future change in land use in the area.

According to the National Park trust, “its metal diet seems to have done the tree no harm, and it has certainly outlived the blacksmith, who is buried close by in the little graveyard up the lane.  The eponymous local newspaper, The Bicycle Tree, provides another lasting reminder of this strange, metal-devouring sycamore.”

The blacksmith, Hugh MacGregor, who died in 1923 aged 82, after 48 years in Brig o’ Turk. He is buried in a small graveyard nearby.

A local author, John Barrington, added: “The tree has stood for more than 100 years.

“The seedling grew up through this pile of scrap metal, on which the local blacksmith had thrown all kinds of things.

“As it grew it swallowed up and took with it hundreds of bits and pieces of metal.

“As it became stronger, the blacksmith would prop up or hang various articles such as the anchor on a heavy chain which he would leave or forget about.

“Gradually, even after the blacksmith passed away, the tree absorbed them too.

“A link of the chain would have been caught on an early branch and, as the limb grew, it became strong enough to lift it."