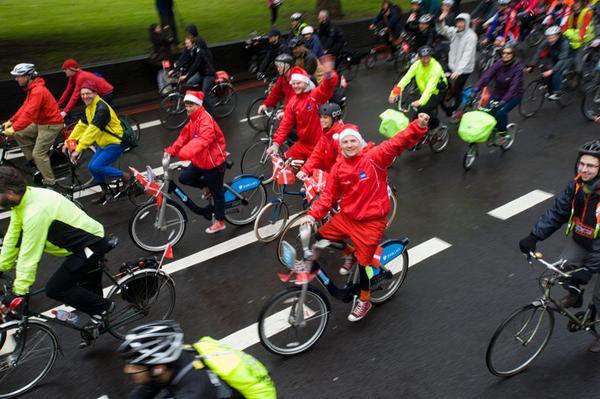 In London for Christmas Day? Go on the annual LCC ride!

Cycle through deserted streets - and discover some of the city's secrets on the way...
by Simon_MacMichael

One of the joys of Christmas, for London cyclists at least, is that the city's streets are all but deserted each year on 25 December - and it's become an annual institution to hold a bike ride to celebrate that fact.

Inaugurated in 2001 by the late Barry Mason of Southwark Cyclists and run by the London Cycling Campaign's South East London Ride Group, tomorrow will see dozens of riders meet up at 11am at Southwark Needle at the south east corner of London Bridge to set off and explore the city.

All are welcome and there's no need to register, and nothing to pay - simply turn up with your bike and pedal off at a gentle pace.

There's an overarching Dickensian theme, with the ride this year focusing on Bob Cratchitt in particular, with organisers promising to reveal the location they have identified as the site of Ebenezer Scrooge's office.

Along the way through Southwark, the City and the West End, riders will discover plenty more trivia and some more details can be found on the London Cycling Campaign's website.

The ride finishes at 1.30pm, followed by a lunch stop in Edgware Road for anyone who fancies it. For anyone coming from south east London, there's a feeder ride from Greenwich leaving from Cutty Sark Gardens at 10am,

We popped along on the ride last year, and it was a delight to ride through near-empty streets, helped by some glorious weather - unfortunately that's unlikely to be repeated tomorrow, but don't let that put you off.

And if you're visiting friends or family and don't have your bike with you, it's worth remembering that unlike the Tube and buses, Santander Cycles remains fully operational on Christmas Day.