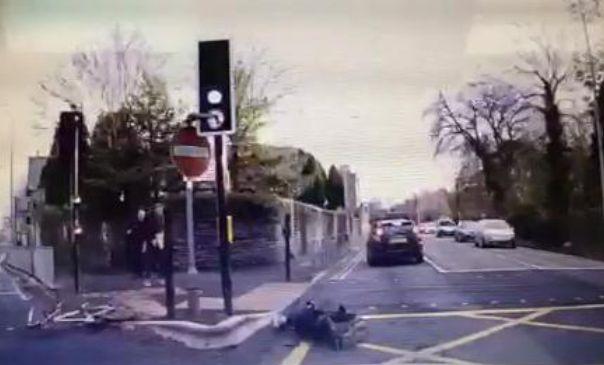 Video: Cardiff cyclist hit by car as he rides through red light

A cyclist in Cardiff filmed flying through the air when he was hit by a car as he rode through a red light escaped with no more than a shoulder injury.

The incident happened last Wednesday 25 November at around 3pm at the junction of North Road and Colum Place in Cathays, report Wales Online.

As the vehicle is being driven through a green traffic light towards the city centre, the cyclist, travelling away from the Park Place area that houses much of Cardiff University, rides through a red one and is flung into the air.

The driver of the car from where the footage was taken said: “The cyclist pulled straight out without looking and collided with the car.

“He somersaulted right over the roof, came down and hit the kerb on the junction. The force smashed the car’s windscreen and bent the door.”

“A pedestrian ran over to him, someone phoned 999 and I put on a high-vis jacket and started directing traffic, because he was lying unconscious in the middle of the road.

“After quarter of an hour, we rang 999 again and they said they were en route. I couldn’t believe it took so long – it was in the middle of Cardiff,” added the motorist.

The collision took place just a hundred yards or so from Blackweir Ambulance Station, and the vehicle eventually arrived 35 minutes after the crash had happened.

According to a spokeswoman for the Welsh Ambulance Service, it is piloting a new clinical response model in response to the McClelland review of ambulance services in the country.

After being treated at the scene the cyclist, a 21-year-old man, was taken to the University Hospital of Wales, a little more than half a mile away.

A spokesman for South Wales Police confirmed the cyclist had been treated for a shoulder injury and discharged afterwards.