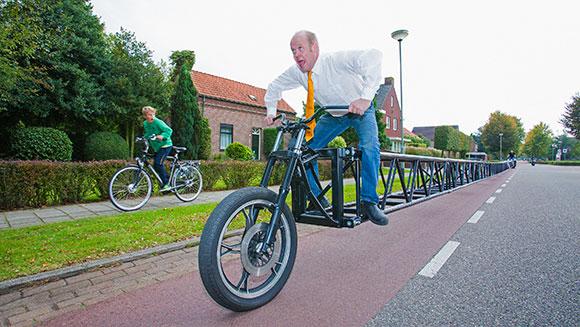 A Dutch team is officially the 2016 Guinness World Record holder, but their 35.79m record won't stand for long.....
by Laura Laker

There's something about the humble bicycle that brings out the inventor in a lot of people, a fact you only have to glance at Kickstarter to realise.

It is perhaps no surprise, then, that the record for world's longest bicycle has been broken twice this year.

The first, measuring a colossal 35.79m (117ft 5in) in length, was built in the Netherlands by members of the Mijl Van Mares Werkploeg. Held together by the kind of frame you'd normally see in lighting rigs, it nonetheless has only two wheels (one that looks like it was borrowed from a steamroller), and no stabilisers.

However, although the Dutch record breakers will feature in the official 2016 Guinness World Records, a longer bike has now been built by the Aussies in Adelaide, a whopping 41.42m (135 ft 10.7 in) long machine, which uses a triangular, rather than square, frame.

Here's a video of the Dutch bicycle in action. Be warned, there is also highly chirpy techno.

Mijl Van Mares Werkploeg's Frank Pelt puts it: "You can ride this bike as long as you like, just straight lines, no corners."