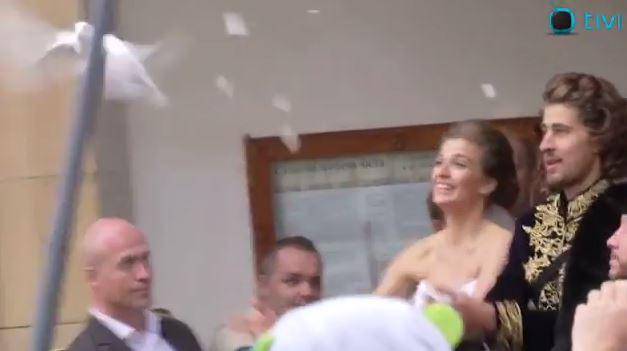 The 25-year-old Tinkoff-Saxo rider, who this year won the green jersey at the Tour de France for the fourth year running before clinching the rainbow jersey in Richmond, Virginia, is a huge star in Slovakia.

The bride wore white and the groom wore … well, something that wouldn’t have looked out of place on a field marshal in Napoleon’s army or, especially given the coat he was wearing before the ceremony, Game of Thrones.

There’s a school of thought that it is traditional marriage attire for a Slovakian man, though a search on Google suggests otherwise.

Here’s a video of him arriving at the ceremony in a Trabant – green, to match those Tour de France points jerseys (the bride arrived in a white vintage Citroen) – then chopping a log, first with a hacksaw, then a chainsaw, a traditional touch that is supposed to demonstrate the groom’s willingness to help solve problems in married life.

And here are some pictures of the new Mr & Mrs Sagan after the ceremony.

Oh, and if you want to see pictures of Peter Sagan, in his wedding outfit, on something that looks like a scaled down penny farthing 12 feet in the air while his bride scales a rope ladder below … well, here’s your chance. More pictures here. Oh, and lots more here.

Best wishes to the newlyweds from all of us at road.cc.