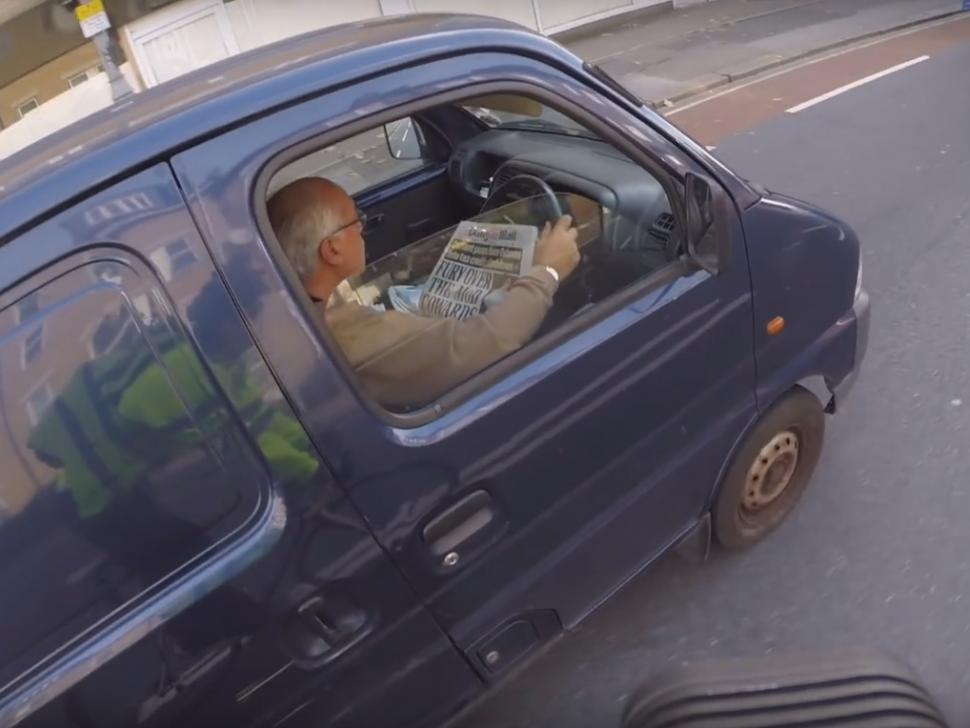 Video: 'Britain's most hated cyclist' films driver who appears to be reading newspaper at the wheel… guess which paper

A man filmed driving a van with The Daily Mail open across his steering wheel has been contacted by police, reports The Mirror. The footage was captured by helmet cam cyclist, Dave Sherry, who has attracted the label ‘Britain’s most hated cyclist’ in some quarters for his commitment to exposing careless and dangerous driving.

The footage was captured in Leyton, East London on October 27. As Sherry, on his bike, pulls alongside the van, the driver can clearly be seen with the newspaper open in front of him.

"That's really safe innit mate?” says Sherry. “How are you watching the road and reading that?"

Sherry sent the footage to the Met Police. A spokeswoman said: "Police are aware of footage of a driver appearing to read a newspaper while in charge of a vehicle. A process has been served by post to the registered keeper of the vehicle."

You may be wondering whether the Mail itself has reported this. It has. Under the headline ‘We know it's a brilliant newspaper but please don't read the Mail behind the wheel!’ much is made of Sherry being a ‘vigilante’ and ‘Britain’s most hated cyclist’.

Sherry has uploaded hundreds of videos to his YouTube channel and evidence he has gathered has resulted in around 70 convictions for motoring offences. However, he has indeed attracted a certain notoriety for the gusto with which he pursues his task.

He has previously been featured on the BBC’s Inside Out East programme and during the summer appeared on ITV’S This Morning in a segment entitled ‘Shaming Britain’s drivers – cycling vigilante’.

Speaking to The Telegraph earlier in the year, he said:

"I'm a cyclist, I'm a driver, I'm just trying to ensure there's space on the road for all of us by bringing bad drivers to justice. I'm doing the nitty gritty stuff people don't want to do. I might have a bad reputation as Britain's most hated cyclist, but so be it - I'm proud of what I do.

"If they want to call me a vigilante then fine, you have to play the bad guy sometimes, but I don't commit offences I just record them. If I catch you, you are going to be very, very sorry. I'd rather act as a deterrent than see someone on the floor – it is like a war zone out there."