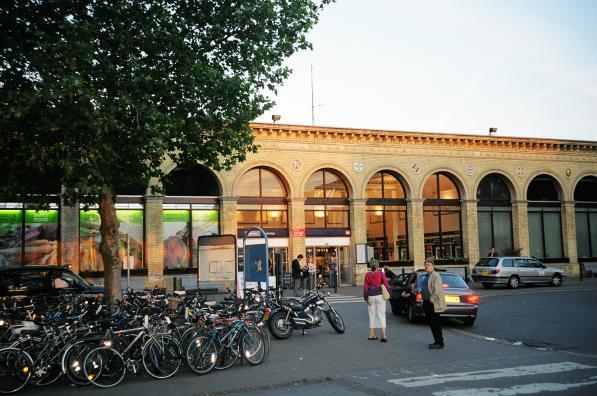 Record investment in cycle infrastructure at railway stations is leading increasing numbers of train passengers to use their bikes to get to the station, according to the Association of Train Operating Companies (ATOC).

The organisation says that around 28 million train journeys a year are made by people who have cycled to the station, equivalent to 77,000, a 43% increase in just two years.
ATOC adds that with a number of projects now coming to fruition thanks to funding from bodies including the Department for Transport (DfT), Network Rail, train operating companies and Cycling England under its ‘Bike n Ride’ programme, it expects to see continued growth in the number of passengers using bicycles to reach the station.

Initiatives underway include the first Dutch-style Cyclepoint, due to open in Leeds during the summer and operated by transport group Abelio,owned by Netherlands Railways, which will be smartcard-enabled and offer a one-stop bicycle facility including hire, maintenance, training, information and a bike shop. Northern Rail, which is helping fund that project, will also be improving bicycle facilities and introducing new ones at 100 stations on routes into the Yorkshire city. Virgin Trains also plans to introduce a cyclepoint at Stoke-on-Trent.

Meanwhile, Southwest Trains, with assistance from Cycling England and ATOC, is developing a Plusbike hire ticketing scheme, making more cycle parking available at stations, and introducing a hire facility at Richmond as well as expanding its Brompton hire scheme at London’s Waterloo Station.

In the north-west, Merseyrail is opening a storage, repair and hire facility in June, which is being developed in partnership with Sefton Borough Council, as well as rolling out secure cycle storage at a further 17 stations.

ATOC says that provision of cycle-rail is now required as a franchise commitment from rail operators, and that its Cycling and Rail Integration Team (CRIT), ATOC has designed a model that franchisees can use to help improve cycle facilities.

Michael Roberts, Chief Executive of ATOC, said: “Train companies are committed to ensuring that passengers are able to get to and from stations as easily as possible, and have made real progress in understanding passengers’ needs and wants and responding to them. But we want to do more.

“Inexpensive, environmentally friendly and good for your health, cycling is becoming an ever more popular mode of transport. We have a long way to go before we are as good as countries such as Holland at getting people onto two wheels, but these figures show that we are improving cycle-rail provision.”

Phillip Darnton, chairman of Cycling England, added: “Train companies have recognised the clear benefits to passengers of combined cycle and rail travel, and that can be seen in the quality of the successful bids for ‘Bike n Ride’ funding. The schemes that are currently underway will improve facilities across the country, benefiting those who currently cycle to the station, and encouraging others to opt for ‘saddle and train’.”