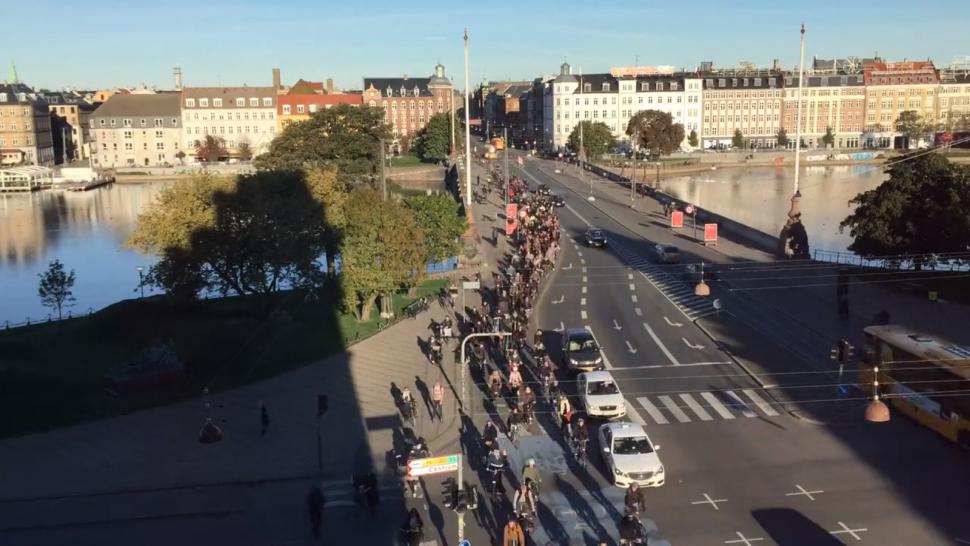 British Cycling has produced a video featuring policy advisor Chris Boardman outlining three essential lessons from the Danish capital Copenhagen that he believes can help grow cycling in the UK while improving the safety of people on bikes.

The former world and Olympic champion visited Copenhagen last month with minister for cycling Robert Goodwill, whom he had invited to come and see Danish infrastructure first-hand.

The minister reflected after the trip that the UK lagged three decades behind Denmark when it comes to making provision for people on bikes.

Here’s the video outlining those three issues, and we’ve also summarised them below and added some background.

1 –Denmark has legislation in place to protect more vulnerable road users, which establishes a clear hierarchy of road users in civil (as opposed to criminal) cases and fosters mutual respect between them, especially at locations such as junctions where most collisions occur.

Under this concept, known as presumed (not strict) liability, following aroad traffic collision, the less vulnerable road user is deemed to be at fault, unless they can establish the other party was.

So the driver of a motor vehicle would automatically be held liable in an incident involving a cyclist, while a bike rider would be in a case where a pedestrian is injured.

The UK is one of a handful of EU member states that does not have such a law, but campaigners are pushing for it.

2 – Segregated cycle routes – similar to the new generation of Cycle Superhighways being rolled out in London – not only keep cyclists and motor vehicles apart, but also reduce congestion for everyone.

Surveys consistently show that the single biggest barrier to getting people cycling is the perception that it is unsafe, and not everyone feels confident riding in traffic.

The more segregated or quiet routes, the more people will switch to cycling from other modes of transport, including cars, for their commutes, goes the reasoning – and as the video shows, that makes traffic flow more easily for everyone.

3 – A standard approach to infrastructure reduces confusion among different types of road users, meaning that everyone knows where they should be, through a combination of shared space on quieter routes and dedicated space for cycling on roads with more motor traffic.

The quality of cycle infrastructure varies hugely across the UK, and while in some places it is changing for the better we can all point towards our favourite examples of poor design that at best causes confusion and at worst puts cyclists in a position of danger.

A consistent and coherent approach, coupled with best-in-class design standards, would remove much of the potential for conflict while also enabling both motorists and cycles to know what to expect in a given situation.