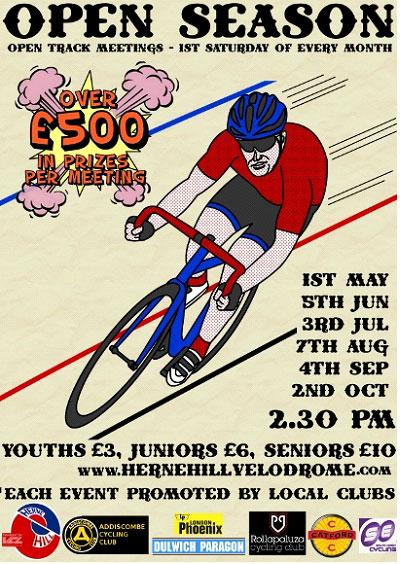 It's what your track bike was built for...
by nick_rearden

The folks behind the Rollapaluza phenomenon, where like-minded groups gather in pubs and watch two people race stationery bikes until they get very red in the face, have obviously built up a fund of fitness that needs an outlet now the spring is here.

This coming Saturday May 1st sees the first of their "Open Season" series of track races which are set to run on the first Saturday of every month until October.

The venue will be the legendary but now decidedly threatened Herne Hill Stadium in South-East London's leafy Dulwich suburb. In the 1950s, Herne Hill hosted huge and popular races attended by the likes of Fausto Coppi and Reg Harris but over the decades and despite a loyal cult following the velodrome has languished with falling attendances and suffered from wrangling over the use of the land.

The track itself is tarmac, 450 metres per lap and sufficiently banked to be very exciting if you've never raced track before. It's also a wee bit lumpy so will be ideally suited to your best 23mm road tyres (maybe pumped up a bit). There are rules and regulations, obviously, for safety, but for starters you will be riding a fixed wheel bike with no brakes. Should be a hoot but then the Rollapaluza people do seem to know have to a good time.

This first event is promoted by Rollapaluza themselves but subsequent Saturdays will be organized by all the local cycling clubs who are excited at this opportunity to welcome a whole new influx of grassroots racers on their über-fashionable fixie track bikes. There's £500 of prizes promised for each race which should make the racing interesting but you'd better watch out that those Olympics racers don't  turn up. Best be suspicious that anyone in a skinsuit is a ringer.

Maybe this new interest will the start of a turning-point for the much loved venue?