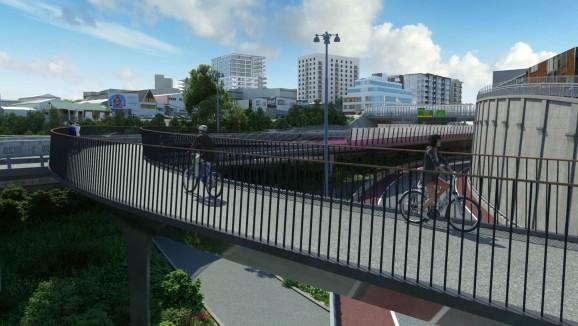 The final section of the ‘soaring cycling sensation’ over Auckland’s Central Motorway Junction has been lifted into place this week, taking the 160m elevated crossing close to completion.

The New Zealand Transport Agency has released a video showing how the project will look when finished - allowing cyclists an easy and safe crossing of a complex motorway interchange.

The 260 tonne bridge was built in sections, which vary in length from 14 to 42 metres.  It was fabricated in Hamilton, painted in Pukekohe and transported to the Central Motorway Junction under full motorway night closures.

“The complexity of the curved bridge structure has meant the installation has been a careful and staged process,” says Brett Gliddon, the NZ Transport Agency’s Auckland Highways Manager.

“We’re proud of the architectural excellence this bridge brings to the inner-city network and the standard it’s setting for transport infrastructure.”

The bridge design is already being recognised internationally and has been shortlisted in the World Architecture Awards which will be announced in Singapore next month.

“People have been watching the bridge installation in the middle of the Central Motorway Junction over the last month and we know it’s created a buzz about how we’re delivering our shared vision of making cycling a safe and viable transport option.”

“The bridge is a soaring cycling sensation in the midst of Auckland’s motorway maze.  We are already claiming it as a creative landmark for ‘The New Auckland,” says Barbara Cuthbert from Cycle Action Auckland.

The cycleway connects with the existing Northwestern Cycleway and Grafton Gully.

It’s a dramatic turnaround in cycling attitudes from the NZ government, who as we reported in 2014 were criticised for a high profile advertising designed to humanise cyclists and reduce deaths on the roads, which was dismissed as useless by a road safety campaigner.

The billboards, bus and radio advertisements cost NZ$400,000 (£200,000) to implement, but are a waste of money, according to Clive Matthew-Wilson, editor of the car review website dogandlemon.com.

The campaign features images of cyclists wearing t-shirts that label them as a son, father or aunt to a loved one.

"The campaign is designed to personalise and humanise people cycling so motorists see them as real people who have a right to share the road safely," NZ Transport Agency spokesman Ewart Barnsley told The National Business Review.

"With their backs to the drivers and a helmet on, cyclists can look like silhouettes and drivers don't usually see their faces. We want to remind drivers when they are on the road that cyclists are everyday people just like them."

Citing the findings of the American Institute for Highway Safety studying 30 years of scientific research into the effectiveness of road safety advertising, Mr Matthew-Wilson said: “Research indicates that education has no effect, or only a very limited effect, on habits like staying within speed limits, heeding stop signs, and using safety belts.”