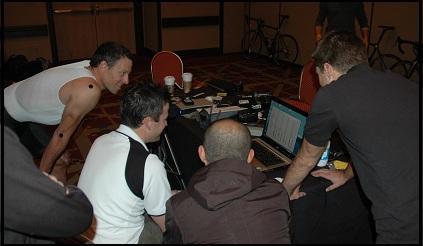 Lance Armstrong and Radio Shack sign up with Retül

Ever the high tech advocate, Lance Armstrong gets on board for 3D bike fitting
by nick_rearden

Retül, who already have deals with British Cycling and Team Sky among others, uses infrared light emitting diodes (LEDs) borrowed from the surgical navigation industry to track very accurate movements of the rider on a bike. A qualified fitting expert can then see data about the way a rider pedals the bike and thus optimize the rider’s position.

There are five qualified Retül fitters in the UK where a typical session takes in the region of two to three hours and costs £175.

Team RadioShack will utilize one Retül system on the road with the team and one system in the Belgian team headquarters. Retül will also assist the team with establishing its bike fit protocols and work closely with the team’s bicycle partners and other equipment suppliers to optimize each rider’s performance throughout the season.

Bike fitting for competitive cyclists isn't new but historically much of the job has been subjective. Many methods exist among bike fit experts but it is generally agreed that dynamic analysis (watching the rider while pedalling) of a rider’s movements provides the most accurate picture of biomechanical motion on the bike. “Retül looks at the way a cyclist rides the bike, versus the old way of bike fitting which could only view the way a cyclist sits on the bike. Better data helps bike fitters make better positional decisions – it’s that simple,” said Retül co-founder Franko Vatterott.

For RadioShack, the benefits of the Retül system are rider repeatability, accuracy, and portability. Most importantly, the technology gathers rider data in three dimensions, making it the most advanced bike fit technology on the market, according to Crucial Innovation. The Retül system offers immediate report capabilities and biomechanical fit data of the rider is archived for future reference.

Part of the Retül fit process includes a “digitization” of the bicycle itself, which gives the rider the exact setup of the bicycle (for example, the position of the seat, handlebars, and pedals) by a handheld, wand-like attachment called the Zin.

In December 2009, Retül bike fitters Todd Carver and Mat Steinmetz went to Team RadioShack’s first training camp in Tucson to dial in the positions for the team’s riders and start the  integration of Retül 3D technology into the new team culture. “It’s an honor for Retül to be working with Team RadioShack. Lance Armstrong, Levi Leipheimer, Johan Bruyneel - these guys are cycling legends,” said Carver, co-founder of Retül.