Now here's an interesting bike*, the Giant Chixie - we're guessing the first women's specific fixed gear bike… although you can ride it as a singlespeed too. Ever since we saw it at Eurobike, Leonie has been asking when we are going to get one in and now… her wish has come true.

Whether you should be careful about what you wish for we'll find out in due course - Leonie has already whisked it away. In the meantime let's give it a quick once over. As you'd expect from Giant, it's good value - £500 and it's not heavy either; ours weighing in at 8.92Kg (19.6lb) and those looks certainly turn heads too - you wouldn't think that brushed aluminium with blue finishing kit and detailing could be combined to such eye-catching effect. 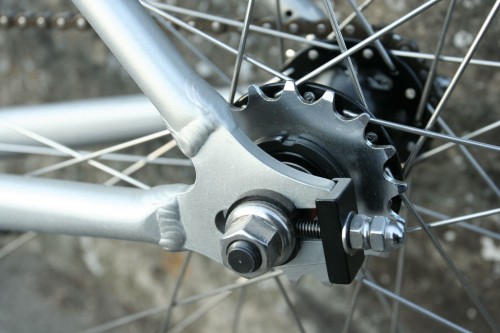 The frame is the female specific equivalent of the Giant Bowery 72, their dropped bar fixed, although in style it owes more to the Bowery FMX - Giant's brakeless fixie/BMX machine. Oddly Giant don't include information on geometry on the Chixie web page although they do for the Bowery (an ommission they are going to, er fix) but as we suspected the big difference between it and the Bowery is that the top tube is shorter. Only the largest sized Chixie - it comes in XS - 42cm, S - 45cm, and M-50cm sizes - matches up to the Bowery, anyway.

What we can say is that the componentry has been specced with women in mind - so the stem is shorter, and the cafe-style riser bars are narrower than they would be on an equivalent men's bike. Cranks lengths though are the same, which when you think about it makes sense - most women having longer legs and shorter torsos than the same height man. Drivetrain is a 46T Sugino Messenger crankset matched up to an 18T flip flop hub giving you the choice of riding fixed or free – Leonie will be riding it both ways - and we'll be expecting a full report on its skidability. The more adventurous might also be tempted to whip those brake off and trying some fixie freestyling - certainly the bars on ours look spinable and the beefy welds at the head and down tube and around the fork legs drop a broad hint that this is a machine with a substantial amount of inner strength. 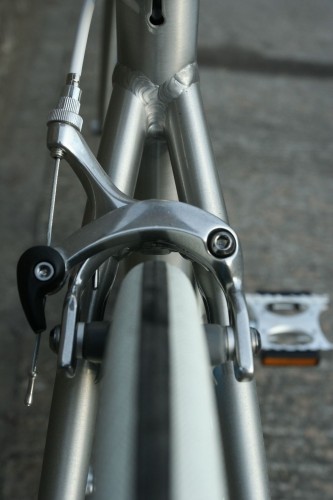 Most of the rest of the finishing kit is either own brand or unbranded - although we'd be very surprised if those brakes weren't by Tektro. The wheelset is a combination of semi deep rims matched up to Vittoria Rubino tyres – the sort of rubber you might fit on your road bike as a winter training tyre. We've been seeing Rubinos lately as original equipment on much more expensive bikes - on a £500 machine they're not bad and it's good to see Giant not trying to save money by cost cutting on the tyres.

Do women need or want a women's specific fixed? Well, Leonie certainly did as soon as she found out Giant made one… whether this is the bike they've been waiting for we'll find out soon.

* yes, they're all interesting.