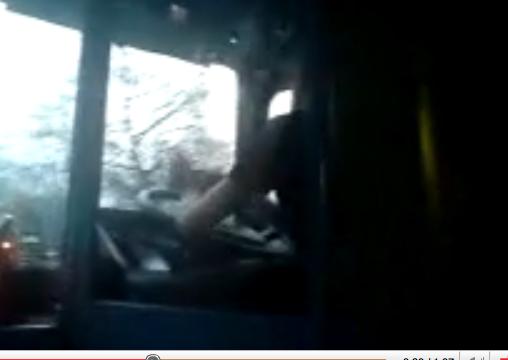 A bus driver in Birmingham has been suspended after being filmed by a passenger steering the vehicle with his elbows as he read a book while driving. The footage, posted on YouTube, shows that the driver was so engrossed in his reading material – we’re guessing it wasn’t the Highway Code – that he didn’t even notice he was being filmed.

The incident took place on Monday evening on Birmingham’s busy Bristol Street and involved a number 61 bus operated by National Express West Midlands. According to The Sun, the driver now faces disciplinary action, including potentially losing his job, for endangering passenger safety, although clearly his actions put other road users at risk too.

A National Express spokesman told the newspaper: “Immediate action was taken to suspend the driver who will now face disciplinary action. It is not appropriate to predict the outcome but an incident of this type is likely to lead to a dismissal.” The spokesman added: "It is completely unacceptable for any driver to behave in this manner."

The Sun reports that the driver continued to read while pulling into bus stops, breaking off from his book only to accept fares, and one passenger told the newspaper:

“The guy was in a world of his own, totally absorbed in his book. There were a lot of passengers on the bus but it didn't bother him at all.”

"He was literally steering with his elbows and glancing between the book and the road ahead. He could easily have caused a major accident.”

The unnamed passenger added: "It's not as if he was on a quiet country road. He was driving down one of the busiest roads in Brum while immersed in a novel."

Yesterday, we reported the results of a survey of Manchester cyclists conducted by Love Your Bike that found that leaving too little room when overtaking was considered the most dangerous behaviour displayed by bus drivers.

Although ‘reading at the wheel’ wasn’t one of the response choices in that survey, we imagine it would have finished pretty high up the list, too.