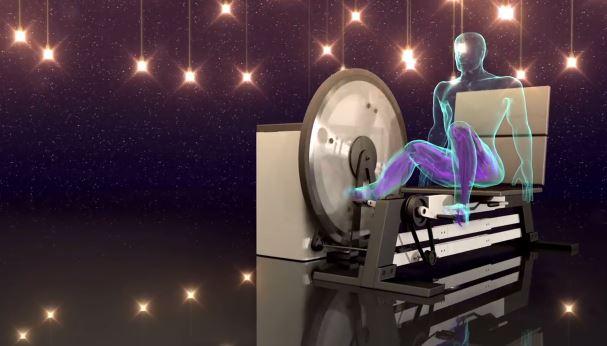 A mysterious billionaire has said he will spend his entire fortune on solving the world’s energy problems, beginning with a stationary bike that he says could power the homes of millions.

Manoj Bhargava, who created an energy drink after dropping out of ‘boring’ Princeton University, has around $4 billion more than he needs.

He has designed a stationary bike named Free Electric, which he plans to distribute to 10,000 homes in India. Here's a video giving an overview.

He says that the device can power lights and basic appliances for an entire day with one hour of pedaling.

“If you have wealth, it’s a duty to help those who don’t,” Bhargava, 62, said in a documentary, Billions in Change.

“Make a difference in people’s lives. Don’t just talk about it.”

“It’s so simple that we think we can make it for $100 … A bicycle repairman anywhere can fix it,” Bhargava said.

Pedaling turns a turbine generator that creates electricity, stored in a battery. Its monitor shows how much the battery is charged.

The first 50 bikes will be tested in 15 or 20 small villages in the northern state of Uttarakhand before a major rollout in the first quarter of next year.

“This is going to affect a few billion people,” he said.

He won’t give the bike away, because he says people won’t take care of something that’s free. Instead, he plans to incentivise distributors with profits.

He added a village can also pool its resources, buying one bike but multiple batteries that can be swapped out to power individual homes.

He added he didn’t want to “ruin” his son by giving him any of his fortune.

Back in 2009 we reported how a programme on BBC1 harnessed pedal power to highlight how much electricity it takes to keep various appliances in the home running, and just how much we waste by leaving devices switched on.

The programme relates how despite Mrs Collins’ efforts to try to get the family to turn off light switches and switch off power-hungry devices such as computer monitors, the message failed to get through until they agreed to take part in a 12-hour experiment that saw the home powered not by the National Grid, but an army of cyclists.

The 80 cyclists involved – all cycling club members rather than your average commuter or Sunday cyclist – were co-ordinated by London-based Electric Pedals, who have previously been responsible for projects including an electric-powered Christmas tree lights in Hyde Park, and also design and build generator systems for any event featuring human power.

Despite the level of experience of the cyclists involved in the experiment, the results were startling. The Collins family had not been informed in advance about the nature of the programme, being told instead to act as though they were at home, and were therefore blissfully unaware of the cyclists pedalling furiously to supply the power, with 30 alone needed to help boil the kettle.

At one point, as the family went about what they would be doing on a normal Sunday afternoon – dad vacuuming while mum sorted out the Sunday roast and the kids were occupied on the Wii – it all proved too much for the cyclists, who were unable to keep up with the demands being placed on them, and power went down.

NB This story was originally published on 10 October 2015 and was republished on 13 November 2015 to include the video.

1
Fears new cycleway will lead to drunkenness, drug taking and 'naked selfies in the woods' (no, really)
2
eBay seller refuses to accept bike auction offer – says "would be unhappy if I sold to Scouser"
3
Three Bora-Hansgrohe riders in hospital after driver crashes into training ride
4
Council has "no intention to enforce" parking restrictions in segregated cycle lane where cars are parked bumper to bumper
5
Boris Johnson accused of breaking lockdown with Olympic Park bike ride – even though he did not appear to break law
6
Five cool things coming soon from Kona, Wahoo, Chapeau, Galibier and Ruzer
7
The real story about Boris Johnson’s bike ride? It highlights confusion over lockdown rules
8
Geraint Thomas talks new podcast, cycling club snobbery and his new penchant for gravel bikes