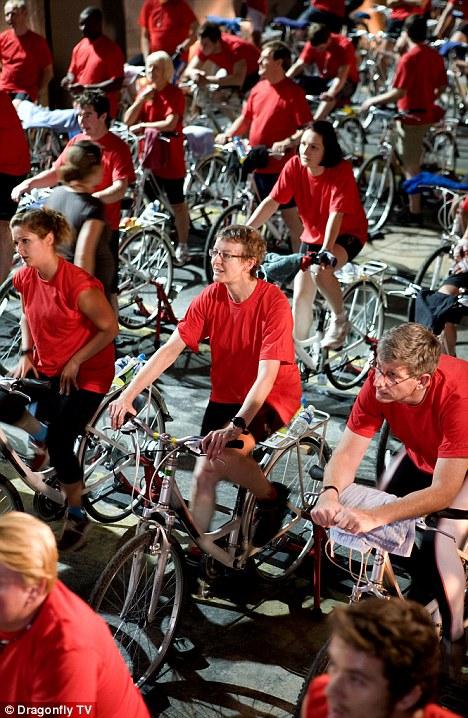 How many cyclists does it take to power a kettle, iron, light bulb? Quite a lot…
by Simon_MacMichael

How many cyclists does it take to power a lightbulb? That’s just one of the questions that will be answered in a programme on BBC1 tonight that harnesses pedal power to highlight how much electricity it takes to keep various appliances in the home running, and just how much we waste by leaving devices switched on.

Called 'Bang Goes The Theory: Human Power Station', the programme focuses on the Collins family from Cheltenham, Gloucestershire. Like many families across Britain, parents Andy, an IT consultant, and Shelley, a primary school teacher, have seen fuel bills rocket in recent years for the home they share with their children Isobel, 15 and Daniel, who is 12.

Previewed in yesterday’s Daily Mail, the programme relates how despite Mrs Collins’ efforts to try to get the family to turn off light switches and switch off power-hungry devices such as computer monitors, the message failed to get through until they agreed to take part in a 12-hour experiment that saw the home powered not by the National Grid, but an army of cyclists, in what the BBC claims is a world first. You can watch it here on the BBC's iPlayer.

The 80 cyclists involved – all cycling club members rather than your average commuter or Sunday cyclist – were co-ordinated by London-based Electric Pedals, who have previously been responsible for projects including an electric-powered Christmas tree lights in Hyde Park, and also design and build generator systems for any event featuring human power.

That includes attending music festivals where co-founders Colin Tonks and Tim Siddall will let revellers power up their mobile phones for free in return for a stint on the pedals to help generate electricity for stage and other equipment.

The pair told the Daily Mail that a typical person using one of their bicycles would achieve a power output sufficient only to power one lightbulb. “An average human can maintain 40 to 50 watts for an hour,” says Tonks, “whereas someone like record-breaking Tour de France cyclist Lance Armstrong could maintain 400 watts for a couple of hours, which could provide adequate power for an electric drill or a 42-inch plasma screen with games console.”

Despite the level of experience of the cyclists involved in the experiment, the results were startling. The Collins family had not been informed in advance about the nature of the programme, being told instead to act as though they were at home, and were therefore blissfully unaware of the cyclists pedalling furiously to supply the power, with 30 alone needed to help boil the kettle.

According to Charlie Brooker’s review in The Guardian, cameras in the house relayed back what was happening there to the cyclists via a big screen, which he described as “a nice device because it means the knackered pedallers gasp with horror and desperately call for more people to leap in the saddle and help each time a family member approaches, say, the dishwasher.”

At one point, as the family went about what they would be doing on a normal Sunday afternoon – dad vacuuming while mum sorted out the Sunday roast and the kids were occupied on the Wii – it all proved too much for the cyclists, who were unable to keep up with the demands being placed on them, and power went down.

Mr Collins told the Daily Mail: “'We really had no idea our electricity use was being monitored at all, let alone generated by cyclists, so we weren't particularly careful.” His wife added, “I took one look at this group of people sitting on bikes and felt incredibly guilty. They were all bright red with exertion, covered in sweat and a few were almost collapsed on the seats.”

Tonks said that the experiment highlighted just how much energy was likely to be wasted in a home through leaving devices switched on.

“Had the family been aware of what we were doing, they would have been able to arrange their electrical consumption so that they didn't use so much (or so much of our cyclists' energy). But as what happened showed, we use electricity so thoughtlessly,” he told the newspaper.

'The first problem was that a number of the cyclists' efforts were used up in maintaining what we call base power,” he said. “When estimating how many cyclists we'd need, we'd factored in such things as lights being left on, but we hadn't counted on things like the warming plate on the coffee machine being left on all day. Supplying that limited who was available to provide power for other items the family needed throughout the day, such as the oven and the washing machine”

“But the real problem came in the afternoon, when the family started cooking, playing computer games and doing the vacuuming - all at once,” he continued. “To attempt to keep up, we were in emergency mode, with nine groups pedalling at full-throttle, while one group rested for just a minute.

'Some of the riders were in absolutely agony, their legs were cramping, they were screaming in pain and sweating profusely. Still, the family used more energy than we could provide - the oven was on for nearly three hours - and eventually the power supply cut out. By the end of the day, the cyclists were completely exhausted, and these are all extremely fit people used to cycling very long distances.”

Mrs Collins said that when she met the cyclists afterwards, “They were all complaining about how much electricity we'd used, when really we hadn't done anything different to what we would normally.”

She added: 'It's been so hard for me to get the message about energy wastage through to the children, but the sight of all those poor people seemed to do it immediately. The children went red and apologised profusely, as did Andy, especially when he realised his error in leaving the coffee machine on all day. I'd say we were all completely stunned.”

“It's not easy to knowingly walk away from a light you haven't turned off when in the back of your mind there's an image of 80 cyclists pedalling furiously,” she concluded. “The experiment has changed our perspectives on energy, and where it comes from, for ever.”

The programme airs tonight on BBC One at 8pm.