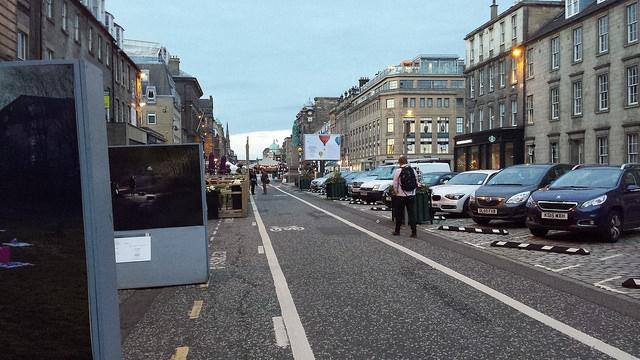 The public are being invited to give their views on plans for Edinburgh’s George Steet following a year-long trial of a two-way cycle lane and one-way system. An open day will be held at the Assembly Rooms on Friday from 2pm-7pm.

The trial was aimed at reducing traffic, improving the pedestrian experience and encouraging an outdoor dining culture. Dave du Feu of cycle group Spokes told the Edinburgh News that he felt it had been a success.

“Overall there has been a pretty positive response to the experiment from both cyclists and the general public. One of the questions asked of cyclists using George Street is had they cycled more as a result of the cycle lane being there and 40 per cent said they had.”

In contrast, Tony Kenmuir, a director of Central Taxis, was concerned about access: “The best thing would be if they stopped skiddling with it. You have to reach a point where there is an acceptance the city centre doesn’t function if traffic and public transport cannot move as freely as possible.”

Marion Williams, who is on the steering group on the future of the street, felt that the marquees used outside restaurants to create a café culture hadn’t worked particularly well and also suggested a different road layout was needed.

Du Feu too referred to “niggles” with the experimental scheme.

“At one point the cycle lane changed from one side of George Street to the other. That was definitely a problem, but overall people were very supportive. They’ve told us the final design is still being worked on, but we have had fairly strong indications it will include segregated cycle lanes on each side of the road.”

He said such a layout would make life easier at roundabouts in particular as previously cyclists had to cross from one side of the road to the other. “For confident cyclists, it wasn’t a problem, but part of the purpose of these lanes is to encourage people who are more nervous or novices. The idea is they should be suitable for an unaccompanied 12-year-old.”

“The George Street trial has been a real experiment for the city, and has allowed us to truly listen and respond to the public throughout. Now we are focusing on the future of the street, and a long-term solution that will benefit everyone. I look forward to seeing the outcome of our design team’s research.”