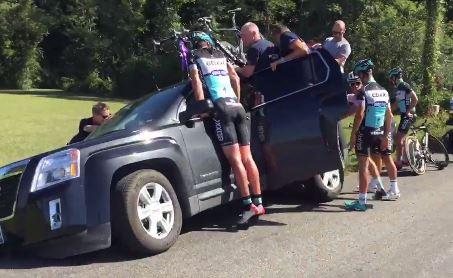 Reigning world champion Michal Kwiatkowski and one of his predecessors in the rainbow jersey, Tom Boonen, were among the world class cycling talent who yesterday tried to help free their team car from a ditch as they prepared for the weekend’s team time trial at the UCI Road World Championships in Richmond, Virginia.

It’s unclear how the GMC sports utility vehicle – presumably hired by the team, given that Lexus is the official automobile supplier to next week’s event – came to be wedged in the ditch at the roadside, but the efforts to free it were filmed by the team’s Colombian rider, Rigoberto Uran.

The mood is relaxed and light-hearted as Boonen took to the driving seat, with team mates including former world time trial champion Tony Martin helping with the pushing, and the vehicle was eventually freed.

Perhaps it was all part of the Belgian WorldTour outfit’s plan to win back the title they gained the first two times it was raced, in 2012 in Valkenburg and 2013 in Florence?

As Cannondale-Garmin-bound Uran’s caption says, “Working as a team is always better.”

On the left in the video is the team’s directeur sportid, Davide Bramati, who was suspended from Stage 6 of July’s Tour de France after a Velon video showing him celebrating Martin’s Stage 4 victory revealed he wasn’t wearing a seatbelt.

One reply to Uran’s post unkindly suggested an alternative GMC vehicle the Italian could use to follow the team.