Anyone that's spent any time reading Cycling Plus magazine over the last 20-odd years will probably have come across the name of Paul Vincent. As a former colleague of both myself and Tony, and the mag's technical editor, Paul's probably ridden a bigger range of road bikes than anyone else in the country over the last two decades. Now he's using that knowledge to set up on his own as a frame builder and this fixed machine is one of his first bikes.

Funnily enough it's currently stabled next to another fixed machine with green wheels – the Marin Dominican which we'll be testing soon – but the similarities pretty much end there. Paul's frame is a fully hand built, fillet brazed affair which features some very unusual touches. Most noticeable is the fact that it has a double down tube and seat tube, joined at the top but splayed to separate tubes where they meet the bottom bracket. The twin seat tubes morph into a single tube at the top of course, so you can fit a standard seatpost; you'll pretty much have to cut it to size though as adjustment is pretty minimal. The cutting and shaping of the twin tubes takes a good long time, and they're brazed together along part of their length to add stiffness to the main structure. The bottom bracket is built up with brass filler to quite an extent on our bike but Paul told us that subsequent frames are going to be a bit more minimal. Beefy chainstays and shaped seatstays lead to a track dropout. Our bike sports a flip-flop hub but since the seatstay bridge isn't drilled for a brake we'll be sticking with the fixed cog. Up front there's a straight blade Carbon fork. 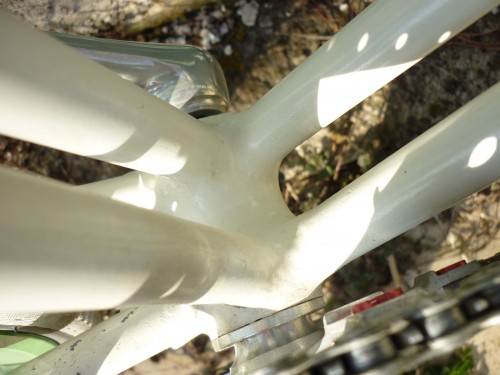 Since this is a prototype Paul hasn't gone to great expense to finish the frame, so instead of a natty professional paintjob it's decked out in white spray paint from the pound shop, which gives a surprisingly good finish. Okay it doesn't stand up to close inspection and it chips quite easily, but production frames will be properly sprayed or powder coated depending on the rider's wishes. Obviously every frame is a custom one-off, and Paul is happy to draw on his years of experience to help you get the fit right. 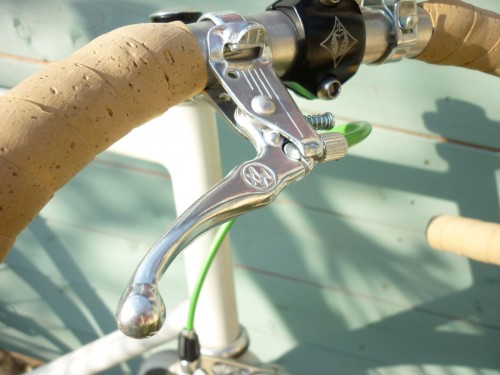 Kit-wise the bike is a prototype and as such a bit of a mish-mash, but there's some interesting bits and bobs. It's running deep section alloy rims laced to track hubs, and the green rims are highlighted by the brake cable on the single front brake, a Rival calliper operated by an esoteric single lever. The bars on this particular beast are a set of deep drop track bars that are about 60 years old – they won't be standard kit – taped with some lovely retro cork. A Gran Compe chainset with a nicely machined 46T ring drives a 16T sprocket to give a 78in gear that's a bit tough for hilly Bath but would be just right for a flatter metropolis. Geometry is more relaxed than a full-on track iron although the deep drops give you an aggressive second position. Talking of production, Paul will be starting to build custom frames from the summer and you can expect to pay around £900 for a frame like this one, or around £1700 for a full build with similar kit. He doesn't have a website as yet but if you're itching to get your hands on one, drop us a line and we'll put you in touch.