Campagnolo has joined Shimano in offering a Direct Mount brake caliper for 2016.

Shimano developed the Direct Mount brake caliper standard a couple of years ago, and made it an open standard. Neither Campagnolo or SRAM rushed out to offer a Direct Mount brake though, leaving anybody building a modern road bike designed to utilise the new brakes with few options other than to use Shimano, or an aftermarket brake. 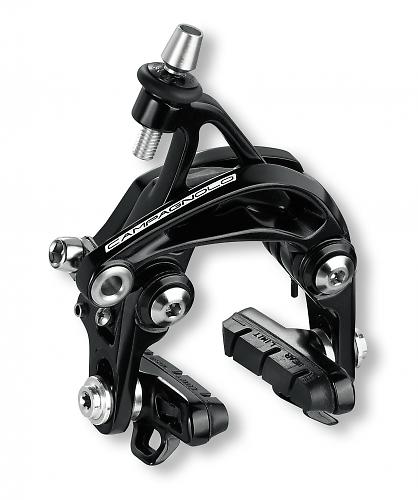 “This completely new braking system from Campagnolo allows for a completely symmetric and efficient brake application thanks to its self-balancing design,” says Campagnolo.

There have been a lot of new bikes in the past couple of years designed to use the new Direct Mount standard. Originally they were popular on aero road bikes, as one of the claimed benefits of Direct Mount was better aerodynamics from the smaller packaging of the brake caliper which sits closer to the frame and fork. However, they’re now spreading to regular road bikes and do seem to be slowly replacing conventional dual pivot brakes for a lot of bike brands. Why though? Well as well as supposedly improving aerodynamics, Shimano reckons Direct Mount brake calipers, which attach to frame or fork with two bolts, rather than a single centre bolt, provide increased modulation and superior braking performance with less flex. Well they would say that wouldn’t they? But actually, the bikes we’ve ridden with Shimano Direct Mount brakes have been very good indeed.

However, a problem arises with any bikes not specced with a Shimano groupset. When we tested the new Colnago V1-r to pick one example, the bike was built up with a Campagnolo drivetrain and, because the Italian company didn’t at the time produce a compatible brake, the TRP aftermarket brakes weren’t of the same high standard as Shimano’s Dura-Ace. 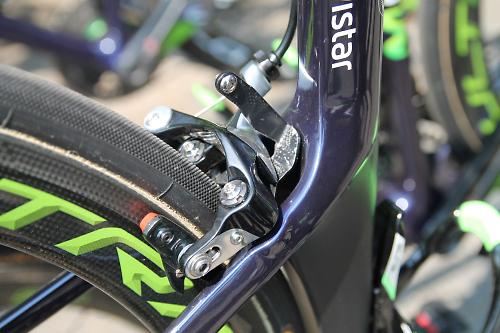 We're not alone. We spotted Shimano Dura-Ace brakes on some of the Movistar Canyon Aeroad bikes (which utilises Direct Mount brakes) with the logos removed, so as not to annoy sponsor Campagnolo. Such issues on Campagnolo specced bikes should be a problem of the past now.

The new Campagnolo Direct Mount brakes appear to be non-series, so they should work well with Chorus right up to Super Record builds.

We’ve no word on pricing or availability at this stage. www.campagnolo.com