We reported on the Helix titanium folding back back in February, which is claimed by its designers to be the world’s smallest and lightest folding bike. Well the Helix has recently hit Kickstarter where it has smashed through its $120,000 funding goal, achieving a staggering $678,980. With 29 days to go.

The Helix generated a lot of interest when we first ran the story, but we had no expectation that it would translate into such blistering Kickstarter funding. It’s available in three builds starting from $1,200, with $150 shipping costs from Canada. The company aims to ship production bikes in March 2016.

What’s so appealing about the Helix? Well it’s made from titanium and weighs a claimed 9kg (20lb) in its lightest incarnation, so it’s without doubt one of the lightest folding bikes on the market. 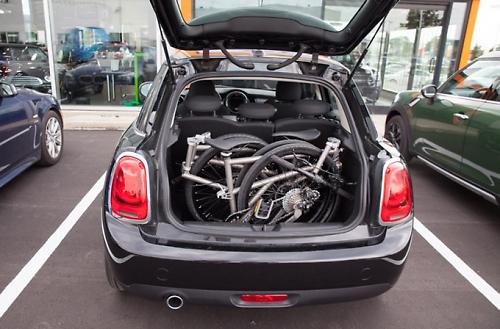 Its inventors also reckon the Helix is smaller, safer and easier to use than any other folding bike, which is certainly a bold statement given the popularity and ease of use of the Brompton, the most iconic of all the folding bikes.

Handmade in Toronto, Canada, the Helix is said to ride like a normal bike. It has 24in wheels, bigger than the wheels used on most folding bikes. It's these larger wheels that the company claims gives the Helix better handling and performance than any of its rivals.

The Helix features a one-piece frame with side-by-side folding, so there are no hinges in the frame, as is usually the case with a folding bike. Instead, Helix has developed patent pending helical hinges that fold the two wheels either side of the frame, with no need for folding pedals. It doesn’t matter what order you fold the bike either.

When folded away, the bike is no bigger than its wheels. For easy transportation, it can be rolled along on its own wheels, and there's an integrated stand as well. The Helix is also compatible with a range of mudguards and racks.

The use of titanium allows the Helix to be lightweight, but obviously ramps up the price - it’s not a cheap material. Titanium is a very durable material, a good property in a folding bike that is likely to get lots of abuse, and it won’t corrode. The Helix will be covered by a 10-year limited warranty.

The Helix is available in a choice of builds. There’s a singlespeed (the lightest bike in the range) or two geared options, a 10-speed derailleur setup using Shimano Zee mountain bike components, or an 11-speed  Shimano Alfine. Claimed weight for that Alfine build is 10.75kg (23.7lb).  Prices are $1,200, $1,300 and $1,600 respectively.