The Canadian designed Helix disc-equipped titanium folding bike is claimed to be “smaller, lighter, safer and easier to use than any other folding bike in the world.” It’s not actually available to buy yet though, it’s heading for Kickstarter soon and you can preorder it now.

It’s quite a looker. Thin titanium tubes and an attention to the detail has produced a claimed weight of 21lb (9.5kg), which the company claims makes it the lightest folding bike in the world. That claim is debatable: Brompton’s range-topping S1E-X is a claimed 20.5lb (9.3kg). It’s still among the lightest though.The Helix also has a maximum rider weight limit of 113 kg however. 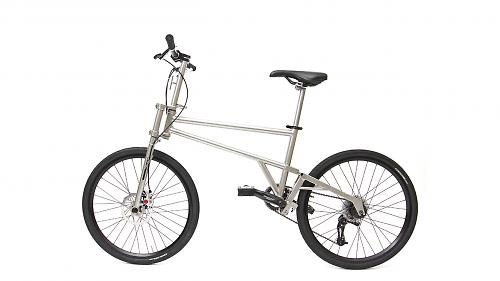 The Helix has been designed from the outset to be the smallest and most compact folding bike in the world, an impressive ambition given a Brompton already folds up pretty small. The Helix folds down to the size of its 24in wheels, with an overall size when folded of 23x25x9in. That’s small enough to fit in a large suitcase or car boot.

“Other folding bikes have smaller wheels but don't fold as small,” says the company’s website.

It uses a patent pending side-by-side folding arrangement that places the wheels beside the frame and cranks, which the company says is the most efficient use of space. The company also claims the Helix can be easily folded and, once folded, rolled on its own wheels, with an integrated stand so it doesn’t topple over when you stop. There is no hinge in the frame so it shouldn’t flex or creak during cycling. The Helix uses a patent pending spring-loaded locking mechanism in the fork and steerer tube to create a safe lock, backed up by a secondary lock, ensuring it’s safe when cycling.

The Helix is fitted with mechanical Avid disc brakes and a 9-speed drivetrain, with the details of the specific components yet to be confirmed. The company also says the Helix can be fitted with mudguards, racks and lights. The Helix isn’t actually available to buy yet, it’s heading for Kickstarter very soon and you can preorder it at the discounted price of $1,199 (normally $1,499). We’ll report on the Helix when it goes live on Kickstarter and wish them luck in getting the necessary funding to put it into reality. First time we’ve reported on a product before it’s been on the crowd funding website...