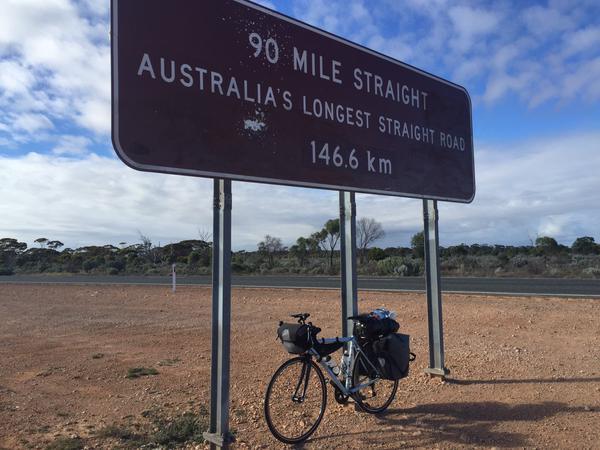 “I’m going to give my legs a couple of days off but I’ll be back on the bike soon,” said 19-year-old Tom Davies upon completing his 18,000 mile cycle trip. Davies is believed to have become the youngest person to cycle around the world having arrived home to Battersea, South London this weekend.

Davies, who has raised over £50,000 for charity through his endeavours, spent 174 days on the road, averaging over 100 miles a day.

“I’ve just cycled around the world. It’s the best feeling,” he told The Guardian. “It’s been a lot of pain, a lot of suffering, so it’s amazing to finish.”

And the challenges he has overcome? “My legs are tired. It’s hard. Snow, rain, wind, hills, other drivers.”

The Guinness Book of Records has said it does not encourage ‘youngest person’ categories, but Davies is believed to be the youngest to complete the feat. Writing on his website before he left, Davies tried to explain his motivations.

“Why am I doing this? Quite frankly I am yet to think of an answer to that question. But simply put: with a love of cycling and wanting to see the world, it seemed the obvious adventure (not many people agree with me on that – but yeh, it’s happening). I also wanted to give myself a proper challenge, to see what I was capable of, before heading off to uni.”

He now plans to study materials engineering at Loughborough University. "The last seven months have been very intense and I am looking forward to a few weeks off before heading to university."

The trip raised funds for Prostate Cancer UK, Carney’s Community and the Sohana Research Fund, which is named after Sohana Collins, a teenager who suffers from recessive dystrophic epidermolysis bullosa, a genetic skin blistering condition that affects over 500,000 people around the world.

Davies said: “I met Sohana herself and it’s just inspirational what she goes through every day. I’ve had a hard seven months but she puts up with it her whole life.”

Davies mum, Alison, told Evans Cycles that her son had done the entire journey on his own and unsupported. However, it sounds like both parents have been helping out a great deal – albeit remotely.

“Tom does actually have a sat phone with him, so we always know where he is. His dad is doing a lot in terms of the route and the technical stuff, and I’m organising a lot of the accommodation, PR and whatever else needs to be done, so we’re very involved. There are times when it’s not possible to be in touch — he wasn’t allowed a sat phone in India, and in Burma it didn’t work. But he has a phone with him and in a lot of places he is able to get wifi, incredibly. So it does make it easier on the parents.”

While admitting that she was worried when he set off and that each country also brings new things to concern her, Alison points out that she has actually heard from her son quite a bit during his trip. “Tom has got lots of friends on their gap years at the moment and they’re not in contact with their parents for five or six weeks at a time. Tom needs our help basically,” she said.