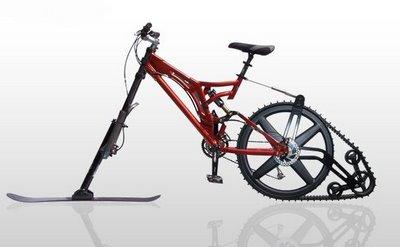 Conditions have been a tad treacherous under-wheel for most of the UK over the past couple of weeks so maybe now's the time for some radical action. Canadian style.

Time to break out the Ktrak – okay, you're going to need some snow to use it, and a mountain bike which may already be too radical for some old-school types, but open your mind, and your wallet (how expensive can the Canadian dollar be? It's probably almost free…) then wait for it to snow, heavily, and the big fun begins.

According to their website “The Ktrak redefines the mountain bike” well, yes, as a snowmobile, but if you have to cope with lots of snow and ice, like they do in Canada, that's probably not a bad thing. What you get is a rear traction unit - sort of like a tank track, which swaps in for your bike's back wheel. Ktrak claim it will weigh around 6-8lb to the weight of a most mountain bikes, up front you get the option of a ski.
It goes up hill they say and is compatible with disc, V, and calliper brakes. The reviews we've seen are mixed but with the positive in the majority.

It works on ice too, and although the Ktrak site majors on it's off road applications some Toronto bike commuters have been quick to see a practical application and they're not alone. "I absolutely see it as a commuting tool," said Kyle Reeves, the Ktrak's 37-year-old inventor, speaking to the Toronto Star (which features some Ktrak using winter commuters), "Most commuters aren't going to use the ski on the front ... just the track for its traction."

The potential downside for commuting reckons Reeves is when you hit a paved surface: "You're not going to hurt it on concrete, but the problem you've got is ... when you get on hard surfaces it's going to want to keep going straight (when you try to turn),"

Ktrak reckon they have have developed a solution: A quick-release mechanism that lifts the track's tail off the ground, allowing for easier cornering. Sounds neat although you still might have to worry about wearing the belt out.

The Ktrak has been around for a couple of years now and is available via the company's website: www.ktrakcycle.com and through selected stores in North America. If anyone is bringing them in to the UK we'd really like to see one in the flesh.