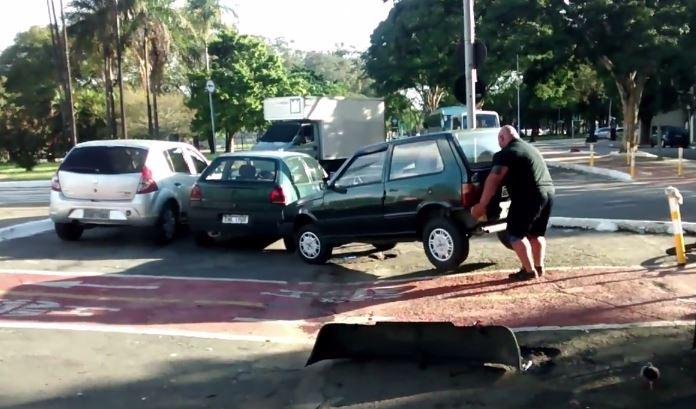 It’s happened to all of us who’ve used a cycle lane, whether on a road or a shared-use one on a pavement – at some point it’s inevitable we’ll find a parked car blocking the route. So, what to do?

Well, one cyclist in Brazil took matters into his own hands – literally – by lifting the car to move it out of the way. After appearing to have removed its rear bumper to give himself more purchase, naturally.

The video, believed to have been shot in Sao Paolo, was posted to YouTube yesterday by Joe Loreto under the title, ‘O homem mais forte do mundo’ – ‘The world’s strongest man’ – and has since gone viral with more than 1 million views.

You have to feel for the rather less well built chap who wanders over towards the end to lend a hand, only to find that the job’s already been done, thank you very much.

It’s not the first video we’ve seen in recent months from Brazil that suggests that motorists ignoring the laws of the road do so at their peril.

And last October, in another video believed to have been shot in Brazil, a woman riding along a contraflow bike line blocked a motorist attempting to drive a vehicle in the opposite direction, to the evident glee of the watching crowd.