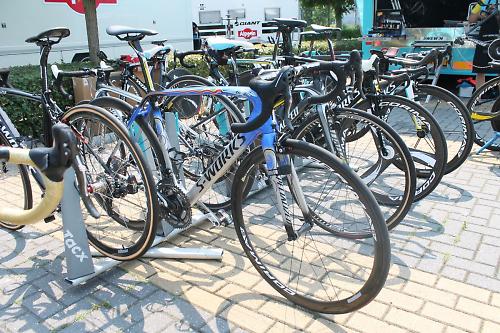 We saw Vincenzo Nibali riding last year’s Tour de France aboard a custom painted Specialized Tarmac, and this year is no different. The custom paint job has been updated though, and now reflects the fact that he has won the three Grand Tours (Tour, Giro and Vuelta) with yellow, pink and red used in the graphics. And of course, there’s the same shark motif, a reference his The Shark of Messina nickname. The Astana team is riding the latest version of the Specialized S-Works Tarmac, which debuted at last year’s Tour. It’s lighter and stiffer than the previous generation frame, and the company has adapted the carbon fibre layup of tube profiles for each size. The bike is equipped with a Campagnolo Super Record groupset and it’s mechanical on his bike, rather than the electronic EPS that most of the team use. Nibali is one of a select band of professional racers that prefer mechanical shifting. Fabian Cancellara is the other big name to also shun electronic shifting in favour of mechanical. There’s an SRM Power Meter for measuring and recording his power output and it’s mounted to Specialized’s own S-Works carbon fibre crankset, with Campagnolo chainrings. He uses Look Blade 2 pedals.

Corima wheels are a rare sight, not only in the peloton but generally. It’s a French company and he’s suing the 32 S+ model, which features a 32mm rim depth - hence the model name - and a claimed weight of just 1,130g, making them the ideal climbing wheel. We couldn’t get close enough to see what tyres he is using, but they look like Specialized’s own S-Works Turbo tyres. 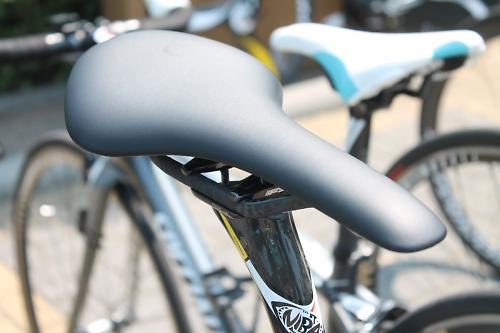 As well as supplying the team with frames and cranks, Specialized also supplies saddles for most of the team. We say most, Nibali instead favours a Fizik Antares saddle with carbon fibre rails, but the decals have been removed to avoid upsetting sponsors. Riders can be quite fussy about their key contact points, and if they don’t get on with saddles supplied by sponsors, won’t hesitate in using one they do get on with. The Tour is hard enough without adding an uncomfortable saddle in to the mix. 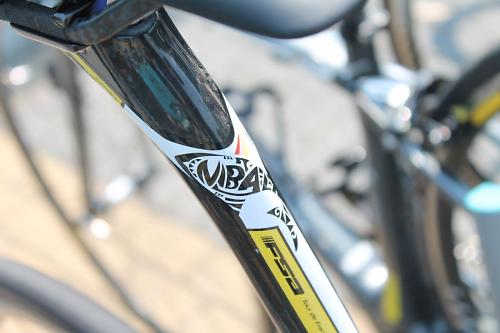 New on his bike is his own signature FSA carbon fibre handlebar, stem and seatpost, based on the regular K-Force parts but adorned with the same shark motif as seen on his frame. You can buy these parts if you’re a Nibali fan.

See all the bikes of the 2015 Tour de France