Scott Bikes launched an updated version of its long-running Foil aero road bike last month, and it is seeing action in the Tour de France. This one belongs to IAM Cycling’s Sylvain Chavanel. 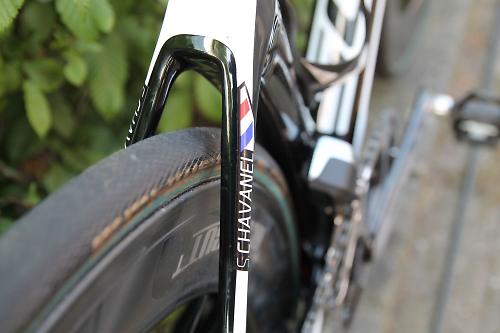 His bike is decked out with a full Shimano Dura-Ace Di2 groupset with an SRM Power Meter measuring his watts. A 53/39t chainset combines with an 11-28t cassette. The fitting of wider ratio cassettes is a widespread trend in the peloton, most bikes we checked out at the race took the same approach. 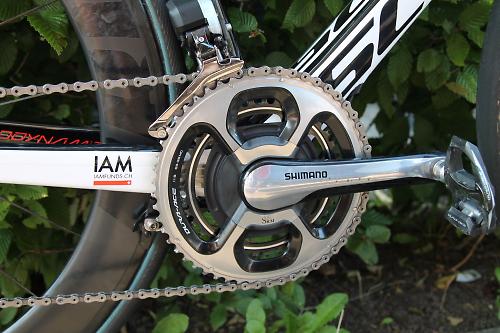 IAM Cycling is the only team to ride DT Swiss wheels, with Chavanel’s bike fitted with RRC 65 DiCut carbon fibre wheels. The DT Swiss website doesn’t actually list this wheelset, the nearest is the RRC 66 DiCut, so presumably these are new? We'll assume the rims are 65mm deep and the key feature of these wheels are the DiCut hubs with specially shaped flanges with proprietary bladed Nail Head spokes. 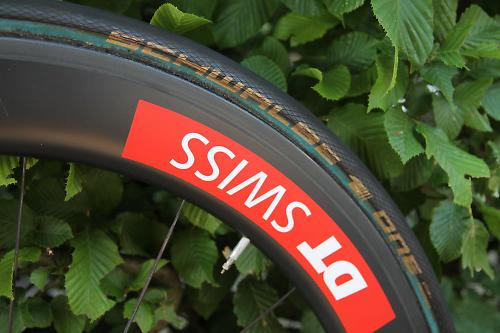 Glued to the rims are Schwalbe One tubular tyres in a 26mm width. Professional racers have really adopted wider tyres in recent years and many bikes were seen fitted with this same 26mm Schwalbe One tyre. The new Foil will accept up to 28mm tyres so there was a decent amount of clearance with these tyres. 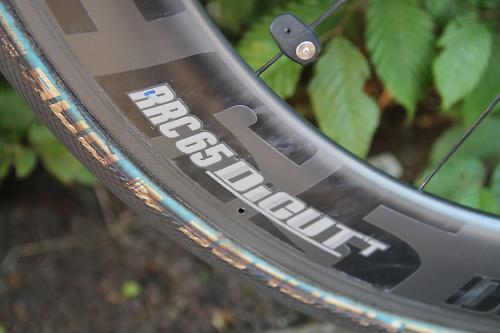 An aero shaped Ritchey carbon fibre seatpost with a single-bolt saddle clamp holds the Prologo saddle in place. At the front is a Ritchey WCS aluminium stem and matching aluminium handlebar. 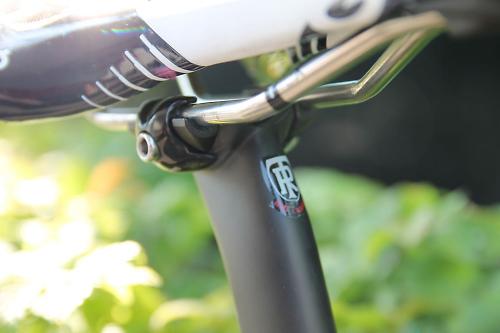 With this new Foil, Scott claims to have reduced the frame weight by 70g, made it more aero, reduced drag by 6 watts, upped stiffness in the bottom bracket and more it more compliant. A lot of improvements. A common complaint of the previous Foil was that it was far from comfortable, so the extra comfort should be appreciated by the team over the wide variety of road surfaces the Tour de France takes the racers along. 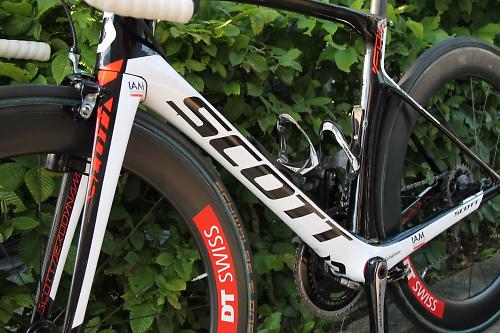 The head tube of this updated Foil has a revised shape, designed to reduce drag. Scott has also lowered the top of the down tube around the fork crown, narrowing the distance between the fork and frame which apparently reduces drag. 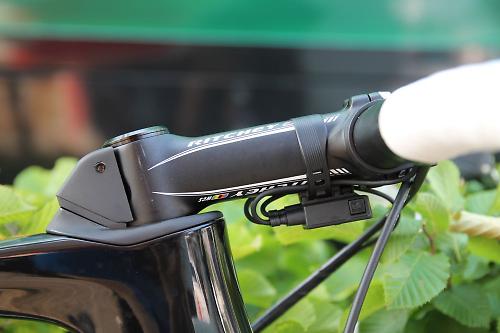 Scott has developed a new handlebar and stem for the bike, but the team ditch this in favour of regular stem and handlebars. The downside to integrated one-piece bar and stems is simply that they're not as versatile as regular bars and stems. The team bikes do however have a small aero wedge butted up against the rear of the stem, supposedly to improve airflow, and probably cleans up the looks when using a normal stem with the new Foil. 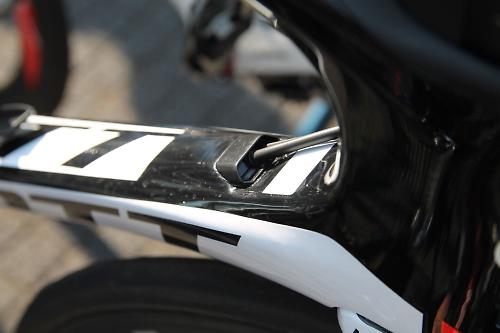 Cables are internally routed still, but Scott has jigged the routing so that the cables and wiring now enter the centre of the down tube. It's very neatly done. Compared to the new Specialized Venge though, the Foil has a lot of exposed cabling, but how much drag that produces is impossible to determine without taking it into a wind tunnel. 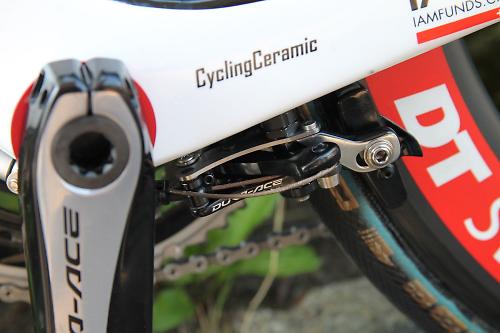 Shimano Direct Mount brakes are increasingly common on aerodynamic road bikes, and Scott has also adopted them. The rear brake is placed in the mechanics favourite position, under the chainstay… 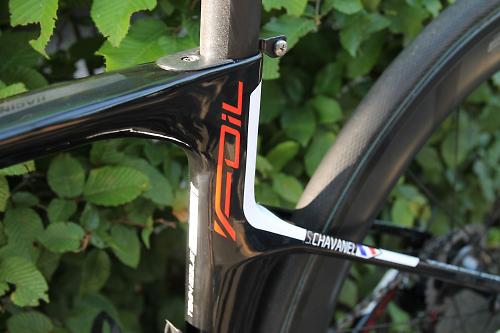 The rear triangle is smaller with the seatstays now meeting the seat tube well below the stop tube. This, according to Scott, improves airflow over this section of the frame and the seat tube curving around the rear wheel is also said to reduce drag. 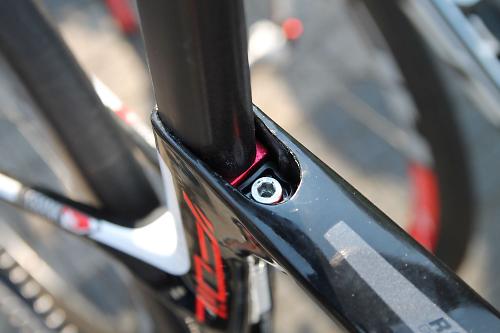 The internal seat clamp is now positioned on top of the seat tube (it used to be on the side) and this photo shows the clamp with the rubber bung removed. 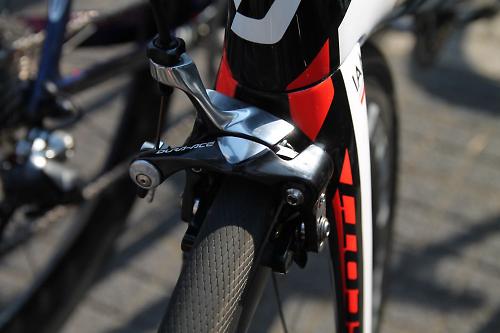 Increased bottom bracket stiffness is provided courtesy of a PF86 bottom bracket, which allows the down tube to be oversized, which also improves aerodynamics as it better conceals the water bottle from the airflow. Up front is a new tapered head tube with the aluminium inserts gone allowing the bearing size to be increased yet retaining the same diameter head tube as on the previous Foil. 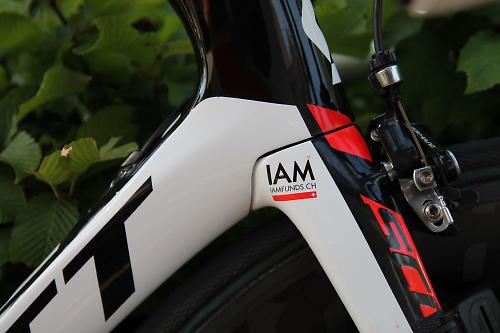 How aero is the new Foil? In a test by German TOUR Magazine, the new Foil is said to save 6 watts on average, equating to 27 seconds over 40km at an average speed of 45kph, when compared to the previous Foil. 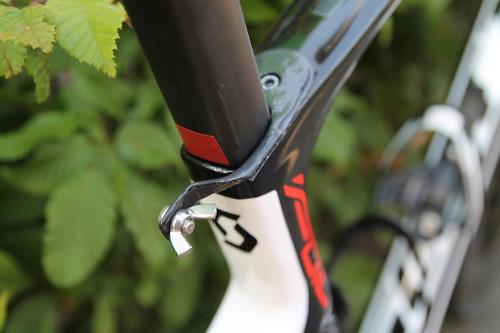 There are many different methods to attaching the race number to the bike. This solution is one of the neatest, the team has incorporated the mount into the seatpost clamp cover, and use a good old fashioned wing nut to secure the number plate.

More bikes and tech from the 2015 Tour de France.