Scott has updated its Foil aero road bike, first introduced to the world back in 2010, with a newly designed frame that it claims offers a 6 watt drag reduction, is 70g lighter, 13% stiffer in the bottom bracket and is 89% more compliant than the previous bike.

Scott’s Foil was one of the first of the new generation of road bikes designed to be aerodynamic, with truncated airfoil tube shapes developed around the confines of the UCI’s 3:1 airfoil ratio rule. Following its debut, the Foil has racked up numerous victories at the highest level, including 15 Grand Tour stages and three Classics, but with the aero road bike category getting increasingly competitive this year, it was time for an update.

Scott then has spent the last 2.5 years completely reworking the frame design, with every section and tube of the frame “optimised independently and in conjunction with each other.” According to engineer Paul Remy, the vertical frame sections of the new Foil are responsible for the vast majority of the reduction in drag. That includes the fork, head tube, seat tube, seatstays and seatpost. Each has been developed independently and in conjunction with each other to reduce drag. Scott says its research reveals that at low yaw angles up to 50% of the total drag comes from the front of the frame. For this reason, the company has redeveloped the head tube, changing the profile by adding additional layers of carbon fibre. Scott has also smoothed the transition area between the fork crown and the frame, by lowering the down tube around the rear of the fork, which narrows the gap between fork and frame and reduces drag. An easily identifiable change from the old Foil is the new rear triangle. The seatstays are lowered and meet the seat tube much further down, which Scott says improves airflow around this area. The seat tube also hugs the curve of the rear wheel as well, closing the gap between the frame and tyre/rim. Scott has also adopted Shimano Direct Mount brakes front and rear, the rear brake positioned underneath the chainstays. As with the previous Foil, all cables are internally routed, but the new Foil now has a single entry point on top of the down tube for all the gear and brake cables. Scott claims this single entry point is more aerodynamic than side cable entry points because the cables are hidden behind the head tube, and because there’s just one hole in the frame there’s less added weight. It’s compatible with mechanical and electronic groupsets.

The new Foil retains the same aero seatpost with integrated seat clamp as the previous model, but the seat clamp has been rejigged, with the bolt now located on the top of the top tube, rather than at the side as before. The seatpost is available with a 5 or 20mm setback.

Integration is a bigger component of the Foil’s design, with a fully integrated Syncros RR1.0 Cockpit, developed solely for the Foil, aimed at reducing the frontal surface area and drag over the front of the bike. 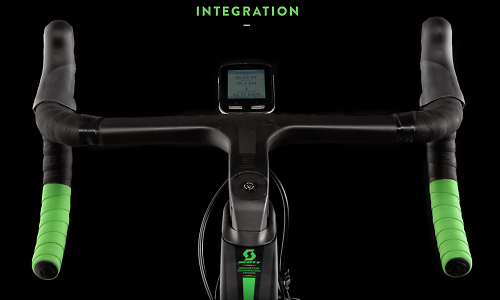 The Syncros RR1.0 Cockpit weighs a claimed 395g and is available in 9 different bar width and stem length options, and with a choice of two Garmin out-front mounts. All of the changes have resulted in reduced drag. In a test by German TOUR Magazine, the new Foil is said to save 6 watts on average, equating to 27 seconds over 40km at an average speed of 45kph, when compared to the previous Foil.

As well as improved aerodynamics, Scott has addressed stiffness and comfort with the new Foil. Increasing stiffness is the new down tube, which has the same aerodynamic profile as the previous Foil, but has an increased diameter where it reaches the PF86 bottom bracket. Scott claims a 13% stiffness increase in the bottom bracket area. Another benefit of increasing the width of the down tube is that it further conceals the water bottle from the air flow, and it also means less air hits the seat tube. 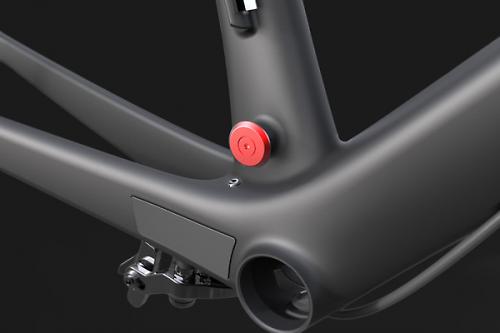 Head tube stiffness has been increased by a claimed 13.5%, achieved with a new tapered 1 1/4in to 1 1/2in tapered steerer tube. The new frame uses the same diameter head tube as the previous Foil, but the removal of the aluminium insert has freed up space for the larger steerer tube. Scott also claims a 6% boost in lateral fork stiffness.

A criticism frequently levelled at the previous Foil was its harsh ride, and lack of comfort over anything but the smoothest road surface. Scott is confident it has addressed this failing, with new thin seatstays and lower seatstay mount on the seat tube, which the company claims provides an 86% increase in vertical compliance in the seat tube area. That's not all, Scott has also boosted compliance by a claimed 11% with the new fork as well. Also helping comfort will be the 25mm tyres the Foil has been optimised for, with tyres and rims getting wider, but the Foil will apparently accept 28mm tyres. There’s a neat integrated chain guard on the seat tube, just above the bottom bracket shell.

The new Foil is lighter too by about 70g, with a claimed 945g size medium frame weight and 335g fork, providing a frameset weight of 1,280g.

Scott will offer five Foil models, with the Foil Premium decked out with Dura-Ace Di2 and Zipp 404 wheels, down to the Foil 30 with Shimano 105 and Shimano RS330 wheels. No UK prices have been announced.