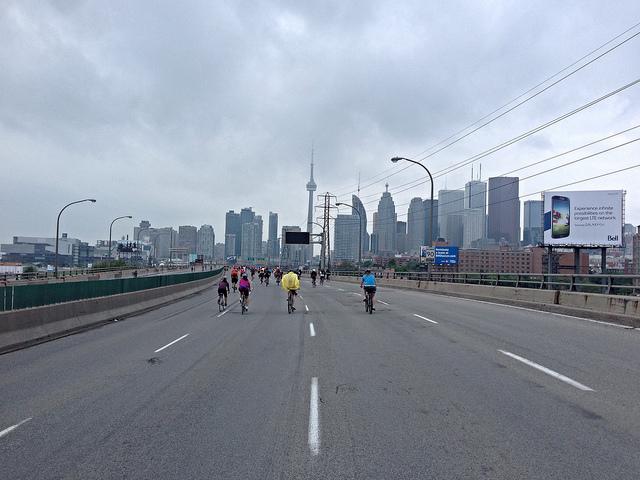 Brazil’s national cycling team have been escorted off a busy highway where riding bikes is banned, while out on a training ride in Toronto, Canada, where the Pan American Games are currently being held.

The nine riders, in national kit, had to be escorted off the Don Valley Parkway [DVP] by police officers, having strayed onto the expressway at around 10am on Sunday morning after noticing a “wide open” ramp leading onto it near the athletes’ village, reports the Globe & Mail.

Detective Sergeant Devin Kealey of Toronto Police said: “They were looking for a one-hour ride and just happened to come up on the DVP, and it looked all good.”

The cyclists spent the whole time riding on the hard shoulder, and will not be fined the $110 that riding a bike on the road in question would usually incur.

DS Dealey added: “They were extremely co-operative and apologetic. Looking back, we’re glad everyone was okay. But we have no doubt they will not be cycling again on the DVP.”

There is something of a history of cyclists preparing to race at multi-sport events managing to end up during training rides on busy roads where bikes are not allowed.

In 2002, a pair of cyclists from Kenya who were in Manchester for the Commonwealth Games were found training on the hard shoulder of the M61, managing to ride for 17 miles before they were stopped by police.

And last year in Glasgow, four riders from Sri Lanka, also appearing at the Commonwealth Games, were pulled over by officers after going for a training ride on the M74.

Back in Toronto, people are allowed to ride bikes on the Don Valley Expressway once a year, for the Ride for Heart mass participation charity ride – this year’s event, with 14,000 participants, took place at the end of May.