This splendid looking white Pinarello Dogma F8 belongs to British national champion Peter Kennaugh. While the rest of Team Sky, even Chris Froome, make do with regular black Dogma’s, Kennaugh’s bike has been custom painted to match his red, white and blue jersey. Along with the white finish, the frame is decorated with red and blue graphics, red on one side of the frame and blue on the other. Its simplicity should be applauded - we've seen some pretty lairy custom paint jobs over the years that can be hard on the eyes. 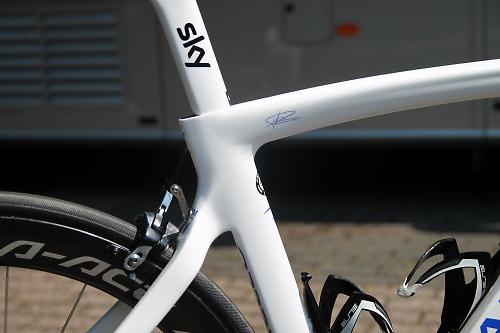 Kennaugh must be getting pretty used to riding a white bike. He also rode a custom painted Pinarello Dogma F8 just like this one through the 2014 season as well. Chances are it's the same bike. It’s a bike that easily stands out in the sea of black Team Sky bikes when they’re lined up alongside the team truck, and must make the other guys a bit jealous. Special paint job aside, the bike is identical to the regular Team Sky bike. The Dogma F8 was introduced at the 2014 Tour de France, and represented the Italian company’s first road bike influenced by aerodynamic design. All the tube profiles have been shaped to reduce drag, including the fork blades and seatpost. As well as that, Pinarello makes claims for it being more comfortable and stiffer as well.

A reminder of the key stats of the latest Dogma F8: 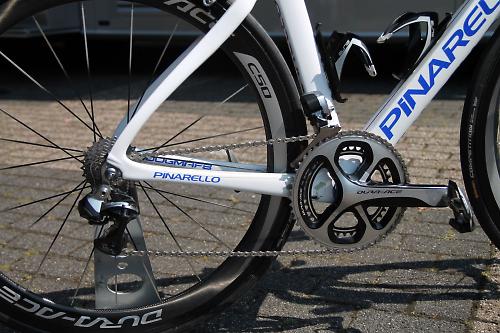 Elsewhere, it's business as normal. The frame is decked out with Shimano’s Dura-Ace Di2 drivetrain, with a 53/39t chainset. Fizik sponsors Team Sky and has produced this special white, red and blue Antare to match the frame. Carbon fibre rails shed a bit of weight. 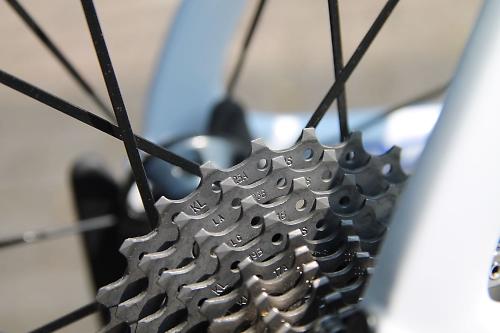 This bike was fitted with an 11-25mm cassette, but most bikes not only in the Team Sky fleet but also in most of the peloton appear to go with 11-28t cassettes. Whether Kennaugh has been racing this cassette we don’t know, this bike was photographed before the race started so he might well have changed it. He opts for a PRO Vibe aluminium stem in a 140mm length, mated to a similarly aluminium PRO handlebar, with a classic bend, which gets him nice and low at the front. 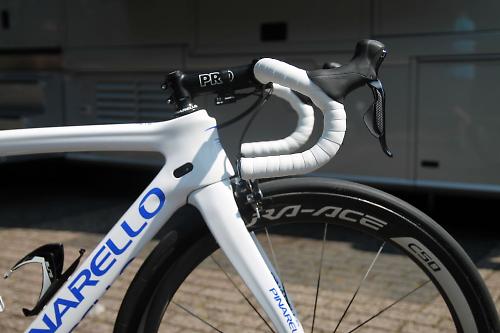 A couple of spacers, above and below the stem, provide a bit of height adjustment should he need it. 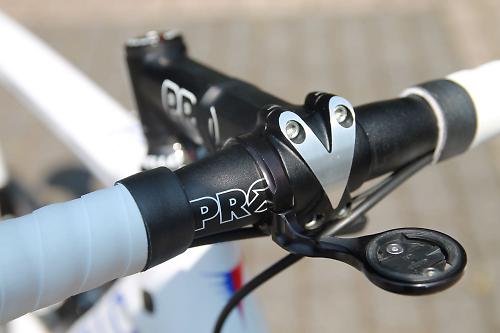 An aluminium K-Edge mount keeps his Garmin in plain sight. That’s where his race number goes, a neat bracket attached to the rear brake caliper. 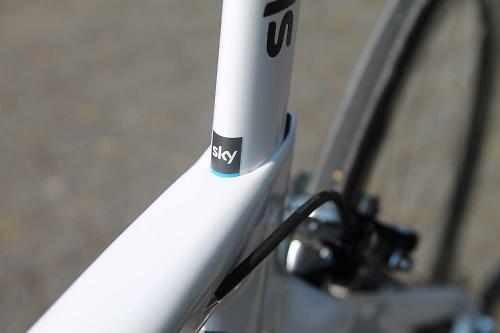 Most team bikes have a wrap of tape around the seatpost to mark the saddle height. Team Sky get an extra mark for using a special Sky sticker to do the job.