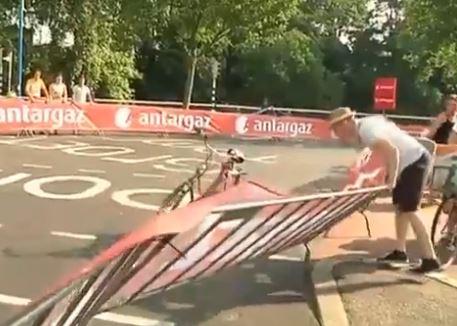 A postman in Utrecht has been caught on film having a bit of a meltdown after finding his way blocked by barriers erected for Stage 1 of the Tour de France on Saturday – throwing his bike over the railings, before launching a four-letter tirade on volunteer ‘Tour Makers’ who asked him what he was doing.

The postal worker – speaking in what is unmistakeably an English accent – tells a female volunteer “"I'll knock your teeth out” after clambering over the fence.

Then, when two of her male colleagues come over to try and stop him crossing the road, he tells them, “Don't be ridiculous. I've got 80 kilos worth of post." He adds: "F--- off you imbecile."

According to Australian broadcaster 9 News, the postman has spoken to his employers about the incident and apologised to the Tour Makers involved.

While PostNL did not condone his actions, it did point out that there were extenuating circumstances as a result of both the weather and the Tour’s Grand Depart in Utrecht.

A spokesman for the national postal service said: "This is inexcusable, but our employees have been working for days in the heat, with jobs a complex traffic situation.

"Moreover, this man had taken extra work of his colleagues, in addition to his own route and he was already 20 minutes on the detour."

While the postie has clearly kept his accent, that’s more than can be said for former England manager Steve McLaren, who famously went native with his intonation and pronunciation when managing Dutch side, FC Twente.