How many yellow bikes are we going to see in this year’s Tour de France? I’ve no idea, but here’s the first one, belonging to Rohan Dennis who posted a scorching time in the opening 13.8km time trial around the host city of Utrecht, clocking an incredible 55.4kph average speed.

The bike under the yellow paint is the same BMC TeamMachine SLR01 that Rohan normally rides, and many of his team mates also ride, though they do have the aero TimeMachine to choose from as well. Here's a look at the BMC time trial bike Rohan actually rode in the time trial. Rohan's TeamMachine SLR01 is kitted out with a full Shimano Dura-Ace Di2 11-speed groupset, the dominant drivetrain in the Tour de France peloton this year. The wheels are Shimano too, in this case 50mm deep Dura-Ace C50 tubulars, with Continental tyres. 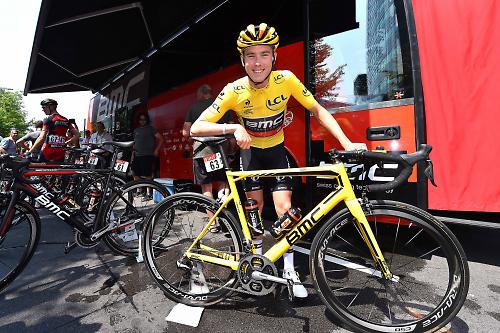 Rohan uses an SRM PowerMeter to measure and record his wattage, and the German company has given Rohan a yellow PowerControl head unit to match the frame.

Not to be outdone, Fizik has come to the yellow party and supplied a special edition Arione saddle to complete the celebratory build. Oddly Rohan didn’t ride the bike with this yellow saddle pictured at the top of the article, opting instead to go with his regular saddle at the last-minute. It’s not just the bike that gets the yellow treatment when you win the Tour de France yellow jersey, clothing too often gets customised. Fortunately the BMC team is too reserved to pull out the yellow shorts, sticking with regular black shorts. Giro has supplied a yellow helmet though, and there are yellow Oakley shades as well - these are the new Radarlock EV, which feature a taller design inspired by the Jawbreakers.

And remember we told you the other day that the Fizik man was walking around with a bag of coloured Boa dials? Well Rohan Dennis wears Fizik shoes and if you look closely in the photo above, you can see his normal black Boa dials have been swapped for yellow ones.