This is the BMC Timemachine TM01 that Rohan Dennis rode to victory in the opening day individual time trial (ITT) of the 2015 Tour de France. The Australian rider recorded the fastest ITT average speed in the history of the race. We spotted the bike being cleaned and prepped in Utrecht on Thursday morning – or, at least, one of Dennis’ TM01s. He has several. The TM01 features what BMC calls an ‘aero hinge fork’ rather than a traditional internal steerer design. The fork spins on bearings at the top and the bottom of the head tube but there’s no steerer to run through that head tube. This allows BMC to make the head tube cross section narrower, deeper and more aerodynamically efficient.

The front brake is integrated into the fork with just the brake shoes extending the size of the bike’s frontal area. The rear brake sits underneath/behind the bottom bracket, positioned there to minimise disruption to the airflow.

The seatstays sit wide so as not to interfere with the airflow around the rear wheel, and they join the seat tube low so as to reduce the frontal area.

The carbon rear dropouts are adjustable so the position of the rear wheel can be fine-tuned relative to the seat tube.

The TM01 uses BMC’s p2p modular stem system that features several spacers that can be combined together to offer many different stem positions, and Dennis uses a 3T Brezza II Team bar. Both the base bar and the extensions are carbon fibre although the Brezza II is no longer in the 3T range. Interestingly, Team is the name 3T gives to its medium tier products, Ltd being the brand’s highest-level equipment. The Ltd version of the Brezza II was a little lighter than the Team version. 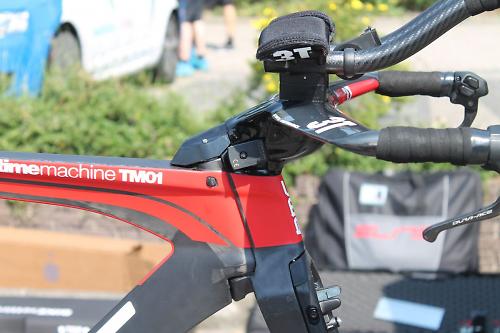 The groupset is Shimano Dura-Ace Di2 with shift options on both the aero extensions and the base bar. The wires, like the brake cables, run internally, the only exception being a short length of wire from the end of the driveside chainstay to the rear mech.

The Di2 battery lives in a little pocket in the seat tube, accessed from the rear while the wheel is out. The junction box isn’t as well hidden, being stuck to the side of the stem where it’s easier to get at for gear adjustments. 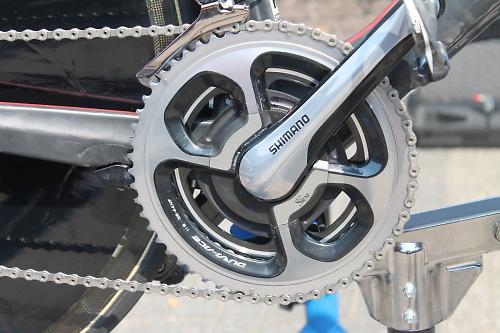 Dennis’ chainset is fitted with a 56-tooth outer chainring so he can turn massive gears – to good effect, as he proved in Utrecht. The inner chainring is 44-tooth. An SRM power meter that’s incorporated into the chainset measures wattage. 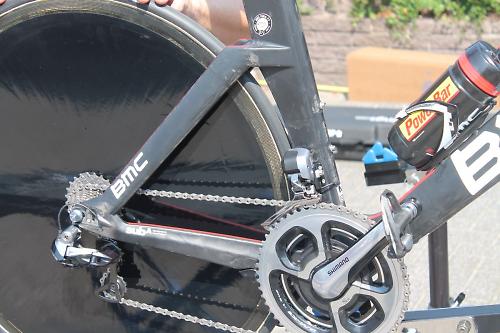 BMC use wheels from Shimano but the faint spoke-like stripes on that rear disc wheel make us think it’s a Lightweight. 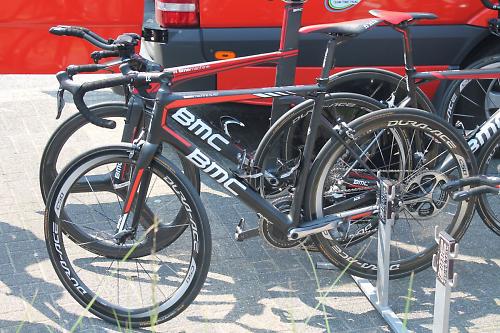 These are both Rohan Dennis’ bikes in this picture too, the SLR01 road bike in front of the TM01 TT bike. The front wheel on the TT bike isn’t a Pro either. It looks like a HED to us.

The TM01 comes with a proprietary seatpost that’s made to the same aero profile as the seat tube. Dennis uses a Fizik Ares TT/triathlon-specific saddle with a carbon-reinforced nylon shell and K:ium rails. It’s just 240mm long, which is the minimum length permitted by UCI rules.